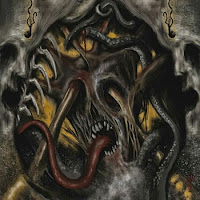 I, Voidhanger records had already impressed me with a split release earlier this year, between the enigmatic Howls of Ebb and Germans Khtoniik Cerviiks, so when I saw the pairing for this next one, two of the label's talents from the Midwest US, I automatically assumed it would be another tasteful, complementary match-up which could very likely cross-over fans who hadn't been exposed to one or the other sides. Aesthetically, The Wakedead Gathering, one of the best American death metal acts to emerge over the last decade, might not seem a fit for the evolutionary black metal of Ecferus, but having been exposed to the minds of these creators on several occasions in the past, I knew they'd find a way to make it work.

I didn't know they'd make it work THIS well.

Now, to be clear, the two bands maintain their stylistic distinctions, so there's a clear divide in its presentation; one is death metal, the other black metal. It's obvious; not one of those instances where they blend the styles together in pure collaboration. But I soon got past that, because the tunes here are just SO freaking good that I almost feel sad that the tracks might not gain the same exposure they would otherwise, since in my experience splits don't always get an audience as large as full-lengths. At the same time, it offers a chance for the artists to experiment a little further, which I felt was the case for Wakedead's "The Blind Abyss", a sprawling, 11 minute sequence of roiling, hypnotic death metal patterns contrasted against bleak, minimalistic clean guitars which segment off some of the separate, Cyclopean riffing sequences. Andrew Lampe's gutturals narrate the rhythm guitar swells like text being dictated off twisted flesh, and the riffing selections vary from a crescendo of more mystical, open chords, to churning old school Floridian tremolo-picked morbidity, and some evil grooves that force the head to slowly start banging as it succumbs to the aural oblivion.

Ecferus, on the other hand, deliver three tunes, which in conjunction, amount to roughly the same length as "The Blind Abyss", and Alp does what he does best, scathing traditional black metal threaded with a more introspective and interesting lyrical inclination, not to mention the great balance of melody and savagery that he compels by keeping the riff progressions varied enough that they never lapse into endless, dull repetition. The leads are great, with an Eastern feel as in "Author of Destruction". As I mentioned on reviewing his prior full-length Pangaea, he can really tap into the primal nature of the cosmic and terrestrial themes he navigates, through that noted variation, even though a lot of the actual guitars themselves are inspired by bands like Darkthrone, Satyricon or the mighty Emperor, which some might consider fairly conventional influences. Nonetheless, he adds just enough spark of atmosphere and creativity, topped off with his raving rasps, that I think fans of thorough, elaborate black metal which hasn't flown off into total avant-garde territory should track his records down. Of the three tunes, I couldn't even pick a favorite. All well done.

And the same could be said for the split as a whole. Clearly you'll have no issue here telling the two apart, but I do feel like the material they chose works together on a listen-through, as they both tend to tap into the same visceral, primal forces for their genres and extrapolate similar shadows of the ancient, the mythological, the obscure, the cataclysmic. Production is tight all around, but never so polished that it would turn off underground extremity vultures. Another feather in the prodigious and eclectic cap that is the I, Voidhanger lexicon. Two US bands that continue to deserve your attention and support, who have great things behind and ahead of them. So why are you still here reading my flowery, meaningless scrawl? Go fetch.