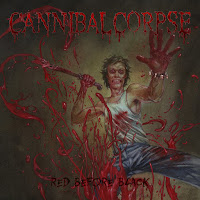 How much is too much of a good thing? For years I've wondered when Cannibal Corpse would finally strike my threshold for redundancy, since they don't exactly offer a lot of variation between studio releases in terms of production, presentation or songwriting. For many, I'd imagine they've already collided into such a barrier years ago, with people still touting their nostalgia for the 'classic' Chris Barnes era recordings, and very little chatter about much that they've put out over the last couple decades, despite a string of consistency and excellence that encompasses works like Gallery of Suicide, Bloodthirst, and several more recent efforts. After hearing the first advance track, "Code of the Slashers", watching the cheesy video and then catching a glimpse of the rather mediocre Vincent Locke artwork here, Corpse's most uninspired cover outside of Kill and Evisceration Plague (both of which I enjoyed a great deal anyway), I did not have high expectations for full-length #14.

As it turns out, I shouldn't have doubted them, because just about every song on this disc is another brutal and energetic exercise in what the band does best. Mid to fast-paced barbarity rooted firmly in the death/thrash of the group's origins, piled on with tireless proficiency by one of the most seasoned acts in the genre. That's not to say there's anything truly fresh or exciting anywhere to be had on Red Before Black, it's hardly an encyclopedia of their most memorable riffs, but once in awhile they'll pull off a few note progressions I can't recall them using before ("Shedding My Human Skin", etc) which fuse perfectly to the alternations between chugging grooves, sinister tremolo picked patterns and the roiling lead and bridge riff pairings that offer up all the album's most atmospheric and engrossing moments, which is how it should be since the mauling momentum of the verses builds up so well towards them. You've heard all these performance levels before from these five individuals, and they never exactly surpass themselves on any of the 12 tunes here, but for a band to be this far along in their career, limb advancing in natural atrophy, it's a marvel that they still hit so fucking hard, the thrashier rhythm guitars like punches to the mid-section, the quicker material evoking sheer carnage.

Nary a chink in the armor, with the exception of the aforementioned "Code of the Slashers", a rather dull piece until its own mid-section, and even some of the most simplistic progressions like the bite of the guitars that open "Firestorm Vengeance" just make you want to punt someone's head clean off their neck-stump. Red Before Black is every bit as pit-ready as their classics, without eschewing the slightly clinical technicality that musicians like Webster, Barrett and O'Brien seamlessly integrate so as not to bore themselves with too much repetition. Corpesgrinder's Target shopping excursions have certainly given him some focus and relaxation, so when it comes time to belch out the latest round of lyrics he still has the same level of flailing, ogreish presence that he's brought to the group since Vile. The violence invoked through the prose isn't highly distinct from a lot of Corpse past, but tunes like "Heads Shoveled Off" still conjure up some grisly amusement as they yet again expand their lexicon of serial killers, body horrors and other outcomes that are not exactly optimistic. In short, you know what this sounds like, and while it's hardly one of their best studio efforts, you are getting what you pay for, a pound for pound visceral onslaught by a guild of veteran executioners.