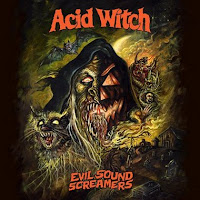 The Midnight Movies EP was an interesting distraction, but not one I really got into much more than just its novelty, instead pining for the next of Acid Witch's original full-lengths, since they had been on an incline from Witchtanic Hellucinations through Stoned to the Spooky split they put out with Nunslaughter. With Evil Sound Screamers, Slasher Dave and company retain a chunk of their original doom style and then dress it up with a lot more silly horror/Halloween influences than ever before, to the point of utter absurdity. And you know what? If you're in the proper mindset, with a couple dripping candles, a pipe or bong, and a stack of the cheesy yet unforgettable horror VHS tapes, I don't know how you listen through this without at least smirking, if not just having an outright blast as it lurches along with goofy confidence.

The focus here is on a hybrid of Sabbathian stoner-doom with the slightly more refined, melodic strains of riffs that hail from European Gothic doom bands who were themselves inspired by those forebears, but took it to another level of atmosphere. Trad metal and rock influences abound, but these are woven into the measured, patient pace of the album's deep, raw grooves. But that's really just the bedrock of the recording, because they proceed to smother it with synths and organs and all manner of growls and higher pitched, witchy vocals to the point that it almost would seem as if it were cluttering up the mix if it weren't so damned, ironically alluring. I wouldn't say that any of the individual guitar lines were all that remarkable, and in fact a number of them are really predictable, but the sum of this album is just one that feels unique to Acid Witch, because it doesn't take itself so seriously and instead smears you with a face full of over-the-top atmosphere, and a riff set that at least tries to diversify itself so you can discern individual tracks from one another and not just have some overlong, samey slog which is not uncommon in the subgenre.

I really enjoyed the use of the samples here; when combined with some acoustic or keyboard they seem to manifest this strange meta-commentary on cult horror, while ceding the album completely to the heavy metal elements. The synths really are a dominant force, generally used to convey the mood of campy haunted houses, theme parks or the sorts of pads and pitches you'd expect from b-grade horror scores of decades past, like thick distorted runs that will often be matched up with Dave's growling (as in "Cheap Gore"). Or sometimes, they'll ramp up the fuzz on the guitars as they do in "Nain Rouge (The Red Dwarf)" to a super-desert-stoner-rock degree just to keep the listener from roiling over in any form of redundancy. Evil Sound Screams is far from complex, but the panoply of sounds it manages to sneak in there keep it fresh and compelling and in their strange way present a band on the precipice of some form of progression, no matter how crude its core.

That's not to say it's without its annoyances, since some of the harsher growls can fall a little flat, or some of the shrieked vocals just make it feel like the band is fooling around too much. "Enter At Your Own Risk" is almost a pure crone-like narrative piece, for example, where each word evoked might have you keel over laughing, but even here it's really flush with the theme of the album, the tongue-in-cheek sorcery the band as always clad itself in. It's not going to be for everyone, because it's a dense, sloppy mess at points, and some might not get its sense of humor. But by the time the album bursts into "Hardrock Halloween", which opens with the album's sleaziest upbeat metal number, drizzled in bluesy lead syrup, I couldn't stop smiling...by the time it hit the titular closing track, its best and most epic, I just didn't want the damn thing to end. That proggy horror bridge is amazing, and it gets super doomed out at the end before ending in some cinematic ambiance and PSA funk. After which, I go on and spin the whole thing again, because it's an album that embodies so much of my generation's nostalgia for Halloween...the night before Halloween...and the most fun I've had with Acid Witch yet.