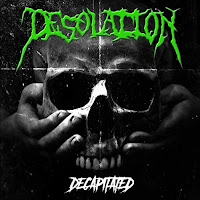 Desolation were another of many Swedish death metal acts to form in the early 90s, perhaps riding the gravesoil-stained coattails of the 'big 5' of that scene, or maybe just simultaneously erupting into a cacophony of growls and blasphemy from their jam space. At any rate, they only issued one demo to my knowledge back then, and subsequently disappeared for nearly two decades, forming back up around 2012, and having since proven much more productive than in their youths. Two demos later, they've got a first proper full-length out through I Hate records, and while it's a relatively blunt and straightforward approach to their genre, it's not at all bad nor is it irrevocably derivative of their better known peers like Grave, Entombed, Dismember, Unleashed or At the Gates.

Granted, they get a little bit of that churning, brash guitar tone from their peers, but not to the point that we're hearing another of a million Left Hand Path idolators. The riffs here have a far more brash and bruising, atonal feel to them which might be a bit more similar to Seance or Grave, with a deep and dark vibe to the rhythm guitars much of the playtime, except where they'll bust out into a simple melody redolent of classic Desultory. There are plenty of riffs that could equate with a d-beat, and also a number of blasted patterns which border on deathgrind, so you can hear a wide array of influences coming from not only their neighborhood, but the old English death metal scene. One really distinct element in Desolation's sound is bassist/vocalist Mattias Lilja, who has this truly huge and hoarse guttural that sits right atop the music, brutal and abrasive if occasionally a little more overbearing than the mix supports. Never a deal breaker, though, and he benefits from not sounding too close to any one of his Swedish peers, pairing up nicely when they break off into a more searing, melodic passage with the drums throttling away ("Night of the Antichrist", for example).

The disc just thunders from my speakers, and while it's really not anything new under the sun, I think this is one which would certainly trigger the nostalgia of anyone seeking primitive 90s-style death that they haven't already heard. You won't get a lot of memorable tracks, but a genuine experience which will dial back the decades and have you banging your head at the swell of the production and the utter darkness established by the hybridization of ancient Swedish and Floridian ideals. They do have a slight degree of variation here, not only in the tempos but some of the smaller interludes or cleaner sequences they use to dress up the tracks, and overall Decapitated is just a well rounded death metal record, arguably about 15 years past its prime, but that's really the point of this sound after all! Going forward, it would be cool to focus in on more intricate hooks, unexpected note patterns, and a few less 'Death Metal 101' song titles and lyrics, but for the audience that would seek it out, I think Desolation is successful enough, ditch-digging authenticity.