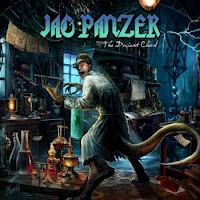 If you remove the classic, excellent Ample Destruction and its sad successor, the miserable Dissident Alliance from the equation, Jag Panzer must have the longest streak of 'good but not great' albums in my entire collection of heavy/power metal. Always something to look forward to, even if you can't expect genius or timelessness, a bastion of consummate USPM professionalism for twenty whole years since they cleaned up their act and dropped The Fourth Judgement through Century Media. The Deviant Chord is just another example...a record with a great title, very cool cover art, and performances so reliable and polished that they seem like we're at the point they could crank them out like treadmill exercises while watching the morning news and drinking freshly squeezed juice.

On every technical level, The Deviant Chord is a success. Between Conklin's nuanced, Dickinson influenced wailing and howling, to Tafolla's controlled shredding, to a rhythm section anyone would be happy to have at their backs. Soaring, anthemic power metal which is busy and majestic enough to capture the European audience, with huge chorus sequences, backing harmonies, and a nice mixture of rhythmic variation between hard-hitting mutes, triplets, open atmospheric chords, and other standard but seasoned techniques to permit these songs to feel distinct from one another, even if they're all barking up the same tree. The Tyrant's sustained howls still sound comparable to a couple decades ago, with perhaps a small measure of understandable strain, but even at his mid range he knows how to let that voice get a wingspan over the workmanlike hustle and bustle beneath. When the band needs to slow it down, and get a little meaner, they do so, as with the title track. When they want a chance to flex their 'sensitive side', they do so, also in the intro to the title track, or during their metallic transformation of the traditional English folk song "Foggy Dew", which is seamless.

But if this album lacks anything, it's just having killer cuts that are going to ricochet back and forth through your subconscious until you can satisfy a craving by listening again. The Deviant Chord is a pleasure to experience while in the act, and proof positive that the Panzer hasn't skipped a beat despite its six-year hiatus since The Scourge of the Light (itself coming after a seven year period), but it doesn't really stick around for long after the listening. They simply haven't stumbled upon the level of hooks that their genre gods like Maiden, Priest or even Helloween have, but there's no way you can write that off as any 'lack of trying'...this is some carefully constructed, dramatic, graceful, melodic, occasionally fist raising metal by a bunch of elder statesmen whose proficiency levels simply exceed the songsmithing by a small order of magnitude. But you know what? It's enough. I'll listen to it again, and I'll listen to their next one, because Jag Panzer doesn't fuck around, and doesn't waste your time, and if you enjoyed records like The Scourge of the Light or Thane to the Throne then I'd be shocked if you didn't also get something out of this one too.