Blind Guardian - Live Beyond the Spheres (2017) 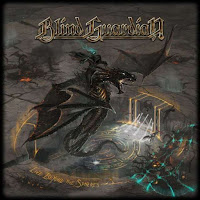 I had already heaped quite a lot of praise upon Blind Guardian's 2003 Live double-album, and experienced the band's performance for myself enough to know that I didn't really require another live product from their camp. But Live Beyond the Spheres, culled from a long stretch of European gigs in 2015, is yet another impressive feat in this arena, spanning three discs and close to three hours of material both obvious and less so. It also prompts me to ask the question: are these sorts of 'compilation' live discs 'cheats'? Is it swaying the odds in such an album's favor if it's simply preened from a bunch of gigs, where you know the band have only really been 'on' for a handful of tracks? I realize that's unlikely in the case of these beloved Germans, who rarely half-ass anything, and I also realize I've responded both positively and negatively to such efforts in the past, because ultimately I think the final product and how it sounds coming from your speakers is ultimately the measure of its value. But it still seems less impressive than it might have if the band pulled it off on a single night.

Otherwise, Live Beyond the Spheres is another gem in the band's crown, a large amount of material which successfully captures the magic of their instrumentation, songwriting and in general the fun factor that their music inspires in their audiences. That's not to say Blind Guardian clown around, the themes in their music tend to the serious, but head out to one of their gigs and you're very likely to see thousands of folks singing along to almost every word through most of the sets. And I feel that warmth and community oozing through every pore of these selections, which have been chosen to represent a wide range of the band's discography, with newer pieces like "The Ninth Wave" and "Twilight of the Gods" bumping uglies with classics like "Valhalla", "Mirror Mirror" and "Bright Eyes". The guitars, drums and vocals all sound great here, with Hansi clearly at the forefront, domineering the performance and complemented with Olbrich's perky, popping and intricate melodies, just the right amount of crowd response in between tunes, and a good variety of material that ranges from the more frenetic and technically impressive to the good old, simpler sing-a-long.

The mix is so balanced that you won't really pick out incongruities between songs performed at different shows. I did notice a slight lack in energy between the tunes from the latest album at the time, Beyond the Red Mirror, and their predecessors, even as recent as "Tanelorn" from At the Edge of Time, but this is more the substance of the compositions themselves than any laziness on the band's part...the material is simply not as distinct or explosive as that found on earlier albums. There's also the problem of how you approach the listening experience...do you really want to sit back in your recliner and listen to three entire discs of Blind Guardian live? There are worse things you could be doing, surely, like the taxes or inflating your sex dolls...strike that, you can do some of these things simultaneously with this album, and it's no less depressing...but the point stands that it's a lot to take in, and I'm not sure that breaking it up into little chunks serves the purpose of the release. I guess if you just want to hear your favorite band perform favorite songs that sound pristine despite the little imperfections and flaws that mar nearly any live performance, and you're waiting for more original material, of you've never gotten to see them for yourself, then this works pretty well. Not as taken with it as I was their prior live album, but there's no debating that they deliver.