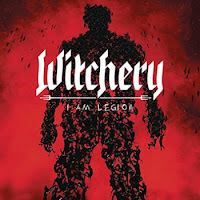 Witchery is not a band to really ever have 'bottomed out', or resorted to releasing pure shit into their legacy, but I'd be lying to say I've really connected to anything they've put out since the first few Toxine years. Many of the intermittent albums seem like pure, soulless riffing exercises which occasionally capture the thrills and styles of Restless & Dead or its successor, but never rival them in sheer thrill-a-minute songwriting prowess. This is a band with an enormous level of talent spread across its roster, and there are no real technical issues or laziness on exhibition, or even that feel of exhaustion you'll come across when visiting acts that might be considered 'side bands' for their members. A lot of the cover art, lyrics and aesthetics have been solid, but for going on two whole decades now they've just never really climbed that hill to its fullest to produce the sorts of timeless blackened thrash metal that they once exploded onto the scene with.

I Am Legion continues with the prior album's lineup, the veteran trio of Jensen, Corpse and D'Angelo joined by Angus Norder on vocals and Christofer Barkensjö on the drums, and they give an earnest attempt to mix a little of their late 90s style with some more varied, ranging, dynamic, bombastic songwriting, which often results in simpler, more warlike riff patterns and a little bit of dissonance through the black metal chords they apply to the more straightforward chords. The album has a few strange choices in pacing, like opening with the titular, drab instrumental Slayer-thon of "Legion" and then lapsing into the horror-theme organs which anoint "True North", which in truth should have been the opener since it just makes more aesthetic sense, and sounds brasher and brighter with its flowing mid-paced gait and potent if predictable riff-set. There's a real 90s groove/thrash feel to a lot of the material, generally derived from that era of Slayer, with a few flourishes of Swedish blackness to create a more suffocating, evil atmosphere, and a hell of a lot is reliant on the loud rasped delivery of Norder, who sounds like a loyal mix of his two predecessors Toxine and (ironically) Legion, but lacks a bit of distinction on his own.

For the most part, the riffs seem like an average grab-bag of Jensen and/or Corpse's vast arsenals which hadn't wound up on any other album, taking but a few minutes to string together into other like-minded sections, but that's not to say they entirely lack energy on a primordial level, which is really the way to approach this. The choruses aren't going to be as infectious as something like "The Reaper", so they compensate with a little more diversity in how the tunes are timed out and placed up against one another. There's also no lack for some atmosphere in cuts like "Welcome, Night", "A Faustian Deal" or "Dry Bones", and some of the hammering, harder hitting fare like "Seraphic Terror" hits you with a few tasteful licks like the trilly guitars between the verses, but overall I'd say the riff patterns fire off at a rate of 2-3 forgettable, and then one with some genuine force to bore into your brain. The drums and bass sound good, the rhythms thick and muscular compared to some prior albums, especially where they rely on slower stuff in the vein of Celtic Frost, Darkthrone or the black & roll Satyricon records, which a lot of riffs here resemble.

The cover art is a little generic, obvious and boring, but to be fair this album is the closest I've come to truly enjoying one since Dead, Hot and Ready, and superior to Symphony for the Devil; so I have to give Witchery some props, even though it feels a little contractual and phoned in on the instrumental side. Lyrically, however, I think it's pretty solid, if not clever or intellectual, with a measure of effort placed into their prose, imagery, and general flow. As a side note, I also dug the video for "True North", which doesn't seem like what you'd typically expect from the band due to the themes they usually toil around with, and that reflects in the music itself a little. Despite my issues, I Am Legion is an effort that would likely please a lot of listeners up front, and does give a little hope that the band is starting to get back on the rails that it, after all, never left for any great distance.