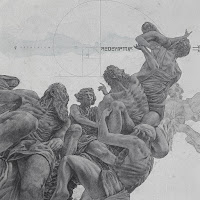 Though I've glossed over their material in the past, Poland's Redemptor really knew how to make an impression with this third full-length, and to distance themselves aesthetically from a good number of their countrymen. Technical and dynamic, theirs is a sound which is not easy to predict or pigeonhole, although the broader strokes are of a semi-brutal brand of death metal which relies on extreme drumming, guttural vocals, and churning guitars that focus on a lot of spatial chugging, lower octave chords and jangling, dissonant upper strings for atmospheric embellishment. Arthaneum might not thrive entirely on independence from the tenets of its genres, but there's no question this was one of the more adventurous death metal records in 2017 and one that should perk a lot of ears if they can divert themselves away from the trending nostalgia-driven bands.

The first track alone was enough to hook me, "Éminence Grise" a swell of strings and synthesizers that rolled into these brick-work double bass batteries and vile guitars before dropping back into these more airy, ambient instruments. When Redemptor get heavy, there are some clear parallels to bands like Morbid Angel, in how they can so effortless shift between these alien, slower sections and then explode into brief blasting spasms, but there's also a choppy sense of clinical death/thrash which they implement to bind the two other temporal poles into one, and then they permeate all this with bends, wails, and whatever tricks they can to keep the ear performing acrobatics to keep up. Riff-wise, they are quite fulfilling, bouncing between sinister note progressions and warmer, melodic phrasings, but I also have to say here that I don't know if there was another record of this type I've heard lately which tested out so many tempos, rhythmic syncopations and riff styles while somehow managing to rein it all in to a cohesive, single-band experience. Every bridge throughout the album, every 'chorus', and every verse is exploring the border parameters they've established, rather than just sitting in the center of the fucking box.

The proficiency is staggering, not because they show off but because they transition so smoothly between all these insane passages, molding a dystopic atmospheric wasteland. Leads are boundless in potential but kept in check with bluesy melodies or tonal shifts into prog shredding that don't wreck the songs surrounding them. It's a band that can not only sate fans of tech gods like Decrepit Birth, Gorguts, and Gorod, but those who really just want interesting, well rounded death metal which doesn't come across as remotely cliche. The lyrics are intelligent, philosophic and might come off as some mumbo-jumbo, but certainly meaningful to the band which wrote them, and a tune like "Semantic Incoherence" lacks nothing for poetic imagery and phrases. The production is clean and rich but pummeling to the gut at the same time, so much flying around but it's all easy to ingest and distinguish from the other instruments and growls. The sum Arthaneum experience might not be the most memorable in the entire death metal lexicon, but it should certainly make some fucking waves if there's an ounce of justice in the death metal underground. Killer album.