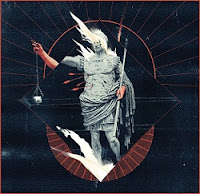 From reviewing their split with In Cauda Venenum and Spectrale last year, I was already prepared for the sort of onslaught Heir was going to manifest. Now, after surviving their full-length debut Au peuple de l'abîme I can attest to the fact that there are no surprises here, the experience is quite consistent with the previous material, an ungodly amalgam of blasted, rasping black metal and sludgier aesthetics that generally dominate the slower passages throughout the record. Granted, at either of these styles alone, the band proves competent, but where this album goes a little further is to vary up the material even more than that, with slower, atmospheric passes in which the drums die down to a din, and some cleaner guitars and bass lines are allowed to conjure up a realm of graceful contrast.

And I'll say it, if NOT for those particular passages, and where they're strung out about the rather lengthy tracks (all around 7-9 minutes), I might have taken away a lot less from the band. When they are launching into their utmost momentum, you're getting a very stripped, noisy, filthy take on traditional black metal which often errs on the side of pure aggression, with little distinct note variation, like the opening to "Au siècle des siècles"; occasionally with a better, more melodic note selection as you'll hear in "L'heure d'Hélios". The mid-paced or slow parts center in on a lot of jangly dissonant notes picked over steady, simple beats and crashing chugs and chords, sometimes letting the nihilistic barks of the frontman sneer out over a very simple, eerie backdrop. This latter portion of the album is almost unanimously my favorite, a lot more evocative of fear and uncertainty than when they're off into a full froth frenzy, but then again those moments of the album also create a strange psychological give and take, as if you were being lulled with drugs and then jolted back into a heart pounding state of conscious awareness.

Don't get me wrong, there are places where these two aesthetic poles collide down the middle, and Au peuple de l'abîme transforms into a truly well-rounded outing, especially where they bust out some unexpected, warmer feeling, glorious element like the bridge to "Meltem". While not a technical or complex record by any means, there are plenty of ideas here, and the band is cautious to implement them without overwhelming the fundamental sounds of the genres in which they meddle and mash. I don't know that I always felt the patience to enjoy the entirety of these tracks, but at the very least Heir does enough to deviate from excessive repetition and there are more than enough moments of elation through the 40 that they've written. Perhaps this is not quite a band at the level of eclectic aural stimulation as peers like Blut Aus Nord, but they are certainly worthy of reaching more ears than they currently do, and Au peuple de l'abîme is a substantial first album with enough replay value to leave its mark, and enough potential to build off.