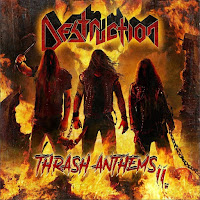 The original Thrash Anthems collection was hardly a popular item among purists for the band and style, nor am I myself normally a proponent for such re-recording packages. But I was so enamored with The Antichrist era of Destruction's reunion that I was actually pretty interested in hearing so many of the Germans' classics given a more modern, muscular, iron-clad treatment, about what you'd hear them sound like live in the 'oughts, and thus was not at all disappointed in the results. Granted, the newer versions of "Mad Butcher", "Curse the Gods", "Reject Emotions" and other staples in my listening diet don't serve to replace or upstage the earlier ones,  but they're a fun alternative that I might still mix in with a playlist culled from 21st century Destruction for tonal consistency.

One decade later, we've got another collection in the series, which specifically features re-workings of other older tunes that didn't make the cut the first time. Thrash Anthems 2007 got all of the more obvious choices out of the way, but its follow-up reaches way back to cover material like "Black Mass" and "Satan's Vengeance" off the Sentence of Death album, "The Ritual" from Infernal Overkill, "Confound Games", "Confused Mind" and "United by Hatred" from Eternal Devastation. Twelve tracks in total, so a little less than its predecessor, but I have to admit that this still sounds really fucking great, the punchier, more robust mix of guitars and drums melding together in a thrashing union which doesn't obfuscate the impact of the original riffs or the nuances found on the older recordings. Perhaps they're a fraction more sterile sounding, if you're someone like me who actually loves the little flaws and different production style of the 80s, but that doesn't mean they're not still a blast to listen through, and like the first collection this is not something I'll always shelf indefinitely. When I'm going for full 80s immersion I'll take the full, original albums, but if I just want to score an evening of drunken headbanging with friends not so versed in thrash beyond Metallica and Slayer, I think Thrash Anthems is a damn good option...

Schmier sounds as virile and nasty today as he did back then, still capable of complementing his harsh barking with the higher pitched screams you'll remember from his youth. Mike is a tireless, incendiary riffing machine who maintains the explosive level of excitement that put the band on the map in the first place, to some extent playing it safe, but why fix what isn't broken? Vaaver is by now the de facto backbone of the trio, with three studio albums already under his belt he's just as hard hitting and skilled as any to come before him. The production is cleaner, sure, but you simply cannot cage the violence that this band's songwriting manifests. As for song selection, obviously this is not entirely the band's A-Game. "Rippin' You Off Blind" and "Front Beast" were never favorites of mine, and I don't know that these new versions really up their ante, but I definitely spun through "Black Mass" and "Dissatisfied Existence" a bunch. Ultimately not as entertaining as the first Thrash Anthems, but still damn solid, and I think Destruction has done a far better job of modernizing its material while 'keeping it real', where a lot of their peers have faltered on similar re-recordings.