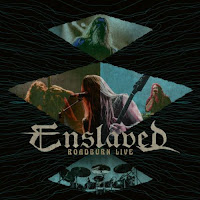 It occurred to me when listening through this that I'd never actually covered an Enslaved live record in the past. I think I remember a bonus disc that came with Vertebrae, and a couple longer format video releases, but not a proper album. Considering that they have toured relentlessly for so many years now, and had countless opportunities to pitch such releases to their labels, I can imagine that it's partly because they, as a band of highly respectable fellas, just don't want to be a nuisance to their fans by putting out a bunch of narcissistic commercial pap. But it's probably also because they were waiting for the right moment, to present a stage recording that sounds immaculate, which this does, and why not from one of the most prodigious and respectable heavy rock fests in all of Europe, the Roadburn Festival out of the Netherlands?

By the time "Building With Fire" had reached its climax, I realized that this was probably one of the best live efforts I'd heard. Granted, it comes with some restrictions...a roughly hour-long set list from a band who could fill a dozen such performances with killer material and not exhaust the highlights of their discography. Enslaved had to be picky and choosy here, and they focus heavily on material that was newer to the 2015 era when this was recorded. So you've got three tracks from In Times, one each from RIITIIR, Isa, Below the Lights and Monumension. Not a problem for me, since this is one of my favorite bands on Earth, and I happen to be more partial to the now-predominant, proggy era of their career, but if you're grognardin' for some Hordanes Land, Vikingligr veldi or Frost then you're not going to be terribly satisfied with this. Which would be a shame, because Roadburn Live sounds fantastic, everything from its atmospheric guitars, organs, drums, and bass grooves resonating at excellent levels over the audience, slightly more raw than the studio recordings but still having all of the minutiae and nuances available across the instruments.

Occasionally the harsher growls get drowned off against the other sounds, but they're still readily audible, and the cleans even more distinct. The track selection is not void of heavier breaks, but the overall intention of the set choices here are to let the audience bask in the atmospheric swells and clarity of the riffing, and it does quite a grand job of that, allowing the sort of engagement and escapism you'd probably experience at pure prog gigs, just dowsed in some snarls and distortion. All the tracks form a seamless set, but I was quite surprised to hear that the finale was a cover of Led Zeppelin's "Immigrant Song", which plays it somewhat straight but adds on a lot more of the same fulfilling atmosphere as their own cuts, so it sounds nearly as much as an Enslaved tune as it does the original piece. Not as kickass, no of course not, but at the very least an interesting interpretation of a track that I think we've all heard plenty enough. I especially dug the bridge there, and it really rounds out a highly focused, smooth performance which is a great representation of where the Norwegians have been traveling lately and where they're headed.