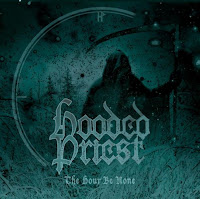 In fairness, I'm going to state up front that doom metal is one of the subgenres in which I find it the most difficult to be impressed by a new record. This is partly because it operates on a slower and more limited riff palette, harder to innovate in, and party because a lot of bands seem to proxy tone and heaviness for actually composing good tunes that, you know, make you feel doomed. There are at least two ways around this. One is delving into a more progressive side of doom and sludge which uses a lot more instrumentation, a higher riff count and a more interesting sense of melody. Another, when you're going the straight, trad doom route, is that you've just got to be better than almost everyone else, and this is the much harder path to walk, the one that the Netherlands' Hooded Priest is walking for their sophomore effort The Hour Be None.

And while they certainly arrive at the end of that path, they unfortunately don't do so in such a timely matter. Perhaps the great intro this album, 'Dolen - Exiting the Real' raised my expectations a bit too high. It's a swelling, droning ambient piece that has little in common with the rest of the album, but damn is it ominous and really sets the anticipation level to have your soul crushed. Once the metal proper actually arrives, though, it's rather dry and predictable, which is not a great combination when you're moving along at this pace. That's not to say they pick the most generic riffs available, but when you're putting together 8-10 minute tracks as a rule, even having a few moments where the energy is lacking or the doom riffs don't sound that sad and evil can cripple the rest. Hoodest Priest are not a band lacking in dynamics, between mid-era Cathedral hustle of "These Skies May Break" or "Herod Within", to the more lurching mechanics which land somewhere between Candlemass and My Dying Bride, you get a good range here...they're not trying to endlessly repeat themselves or bore you at all, but once in awhile, like when faced with the intro riff to "Call for the Hearse", excitement was hard to come by.

Also not a huge fan of the vocals. They've got a wavering edginess to them, but sometimes this is obscured by a goofier, more conversational tone that he flexes between the mid and higher range, and it doesn't really live up to the music beneath it, even where that itself is mundane. I'm all for these sorts of 'honest' doom singers who use natural tones in the Ozzy tradition rather than just growling the whole time, but where it works in some cases (Blizarro, Reverend Bizarre, etc), it's a little inconsistent, also the more glaring when you've got such a long tune to cover. Nothing awful, mind you, but just awkward enough that it detracts from the overall quality. Now, with all this said, you might think I hated The Hour Be None, and that's not the case. It's competent enough, and even fairly cool throughout "These Skies May Break", my fave among these cuts, but there were points during tunes like "Call of the Hearse" and especially the 10 and a half minute "Locust Reaper" where I was phasing out completely from what was happening. If you're a true addict for the style, and dig a good cross-section of the bands I've name-dropped, or a few others like Solitude Aeternus, Dread Sovereign, Cardinal's Folly or Memory Garden, then check it out; you might get more from it than I did.