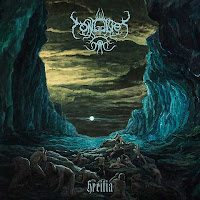 I listen to and enjoy droves of metal records each years, across a wide spread of the subgenres, but few and far between are those that can even for a few minutes deliver me some sort of a genuine creep factor. The full-length debut of Denmark's Tongues is one such case, a highly atmospheric black metal experience which effectively weaves in elements of doom and death metal to create an experience which alternates between haunting, paranoid and frenzied. While there are a lot of bands experimenting with hybrids of these stylistic niches, Hreilia succeeds where so many others falter or plane out because these gentlemen are masters of scripting simplistic but hypnotic guitars and bass grooves that bore down through your temples into your memory box.

I could tell you that I picked up fragments of Canadian alienists Antediluvian or Mitochondrion here, or perhaps scraps of the dissonant French masters Blut Aus Nord and Deathspell Omega, and all of that would be true; but the psychedelic submission and trauma of Finland's Oranssi Pazuzu is perhaps the closest equivalent, though Tongues don't rely strictly on such exotic walls of atonal sheen in terms of songwriting. Hreilia is intelligently set up by the slow, evil, subliminal grooving of the track "Perennial Waves", behind which you can make out all manner of scaling and falling ambiance that gives the impression you're in the wake of some midnight atrocity, the victims' remains cooling around you, bathing in the lunar rays, much like the cover. The album can grow much more savage, with faster blasted parts that rely on busier progressions of chords, but it's generally the rule that the material remains slower or mid-pace, extremely bewitching and atmospheric, and they play around more with the riffing structures and bass lines that actually matter, while using a guttural lead vocal as a constant that helps rein in and bind the material to a sense of bleak oppression.

Synthesizers are used tastefully throughout, whether in some of the shorter instrumental pieces or to accent the metal components with heightened, fell grace. They also use a saranji, an incredibly atmospheric Eastern stringed instrument which by itself can create all manner of depth and drama, and it balances off against the harsher sections of the albums smoothly. The mix is a fraction oblique, sacrificing polish for a more dingy and alien feel that better serves the blend of instruments, but this all works really well as a package alongside the crude, creepy colors of the artwork and the arcane symmetry of the band's logo, or the imagery of cosmic/weird horror and dread which permeates the lyrics. One of the strongest and most sinister new voices I've heard on both the Danish scene and the I, Voidhanger roster in some time, Hreilia is a record which is not immediately impenetrable, but still picks up accumulative value the more you listen through it, with its spooky and subduing licks that massage and violate your mind in equal measure. Euthanasia for happiness.