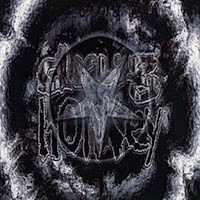 It's important to note that I'm coming at Hail Satan in reverse, having already been smitten with both of Drug Honkey's latest albums Cloak of Skies and Ghost in the Fire, and also digging the record Death Dub prior to those, though that one took me several spins to really start to appreciate. This is actually the sophomore for the Chicago narco-doom fiends, and naturally a lot more raw than the aesthetics they'll continue to develop as they progress. That's not to say this doesn't share traits in common, or that the later efforts lose the sense of repulsive primacy established on the earlier pieces, but here it's not simply a disparity in composition but also in the more primitive production being exhibited. With an impending re-release through Hohlraum records, however, it was actually cool to travel back and experience this with the knowledge of how it would develop.

Hail Satan might have an overt, provocative title, but in truth is not thematically abstracted from other Drug Honkey efforts. Subjects like drug abuse, depression, and institutional rebellion are legion, and often represented with extremely minimalist lyrical patterns that care about little more than getting their point across (i.e. "Reject Religion"). These actually work to the benefit of the songs, because Honkey Head's performance here is positively manic, the true driving force of the disc, and these succinct and straightforward lines becomes mantras that he can repeat over the dissonant mire of the instruments, altering his pitch between barks, growls,  nasally cleans, and other tones that head even further out into the deeps, stretching at the outer membranes of sanity. Slathered in reverb and other effects, they definitely become the most pronounced feature on the disc, possibly a little loud in the mix on some sequences, but critical to narrating the tempest of emotional turmoil that the album is created to deal with. I stress this because for some listeners, they'll prove the make or break factor for immersion into the album as a whole, never shying away from an overload of eccentricity.

Musically, the album is also really simple, with dingy and distorted guitars splayed out in largely patterns of open notes, thinner and buzzing rather than dense and choking, and sometimes striking some hideous and disturbing dissonance, which creates a contrast against the more predictable notes ringing out. Bass-lines are leaden, almost industrial grooves, and the drums limp along in a drugged, hypnotic certainty that allows all these conflicts to crash above them and alongside them. Add to this a bevy of electronics, ambiance and mix effects, and depth is created even where there is an utter lack of complexity. Some tunes are less structured than others, or creep along at a funereal doom pace not unlike an Esoteric, where others revel in an archaic industrial metal framework redolent of Godflesh or Treponem Pal. The deeper into the album, when you hit on a tune like "Silver Lining", affairs become even stranger, like layers of thick and angry skin have been peeled back and you're entering another level of confusion. The whole experience has a live, improvisational backbone, perhaps with a few initial directions that are then left to mutate into bedlam.

It's cool. It's not Cloak of Skies cool, nor Ghost in the Fire cool, because there are added layers of exhilaration and texture on those records. But, being forewarned about what sorts of ugly and hallucinogenic aural hues the Chicago quarter tend to choose to paint with, I certainly connected with the aggravation and despair that swells up in every single track here. The album feels like you're being slowly dragged, at some heightened level of intoxication, through the streets of a filthy urban sprawl, possibly by someone who just mugged or drugged you, listening to the sounds of abuse, addiction and anxiety being shouted from the higher story windows of dank alleys, occasionally being nudged by street refuse, manhole covers half-ajar, or splashed through the piss and rain and whatever the fuck else has mixed in with them. Exhausting, entropic and effective.