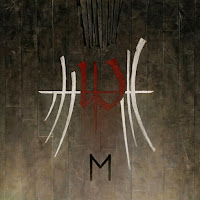 I wanted desperately not to like this album, if only because I believe Enslaved has achieved a monopoly on taste and craftsmanship that places them among the greatest musical acts in the world. Thus, I wanted to bring them down a few notches in my estimation; to prove Ivar and Grutle and company were human like the rest of us. At first, my plan was working. I picked up the record during its October release, nodded along to a listen or two, and then shelved it as I was so heavily immersed into my whole annual Halloween media marathon of horror flicks, creepy reads, gaming and relevant metal reviews to my favorite season. I padded out my ignorance for as long as I could, until it came time to start organizing my year's end lists, revisiting all the material I'd enjoyed throughout the months prior, and making sure I'd heard everything under the son from the CD pile, the digital promo folders, and cruising through various forums, YouTube channels and other recommendation spaces.

Inevitably, the CD called out to me once more, its simple, scratchy cover runes confidently requesting that I take another chance, since I was being so stubborn the first couple runs. I failed whatever Saving Throw it is that I fail so often when experiencing the creations of these Norwegians, and then found myself listening to it again. And again. And six more times after that...

Gods. Damn. It. I was hooked by another Enslaved record.

E is not an effort that will surprise any of the band's following over these last 17 years since the band took a significant leap in nuance and originality with Mardraum: Beyond the Within. Many of their hallmarks remain: a hybrid of triumphant melodic black metal, progressive and psychedelic rock elements, bright tints of post-metal or 'blackgaze', gnarled and clean vocals. They've gotten so well trained on this blend that these traits are distributed quite evenly among the tracks, all spun up into a heavily varied rhythmic stew which, while not offering any specific nuances that you'd feel stand out from the rest of their 21st century discography, still seem like they have a lot of stones unturned, so the precise melodies, percussion patterns, atmospherics and vocal patterns here remain fresh and memorable, hardly doppelgangers of what they've already produced over the last 4-5 albums. Add to that what is, alongside In Times, some of their cleanest production yet, and you've got another effort which transcends the boundaries of their initial genre, with seamless integration of its musical ideas into not only one another, but also the philosophical application of folklore and ethnic Scandinavian religion which they use to manifest timeless, interesting lyrics and imagery.

You'll hear a few straightforward, driving pieces here redolent of an Isa or Ruun, where they were first adopting this brighter, accessible brand of modern Viking, but despite the consonant, shining and warm vibes carried through a lot of the soaring backup vocals or the glint of upper range guitars, they also maintain a subtle air of dissonance that keeps the listener just on the edge of lapsing into a truly safe space. "Axis of the Worlds", a personal favorite here, just rocks itself out with a mesmerizing and evil rhythm guitar slathered and harmonized by wonky, wailing, eerie leads. "Hiindsiight" spits out horns into a comfortable, numbing flow of prog that it feels almost Rush-like, but riding on the fjord-waters out to sea with a shifting sun bearing down on the guitars from over the horizon. What truly surprised me, though, is the band's cover of "What Else is There?" from the 2005 album The Understanding by electronic countrymen Röyksopp. They manage to transform the original into this organic wall of chords, clean and growled vocals which is entirely their own, paying tribute to a cool band and song while not interrupting the natural progression of originals that led up to it, just a really great closer that I would never have expected going into this...

There are euphoric moments on this record where it lives up the drug that shares its namesake, and then heavier passages which remind us that they haven't, for one fucking second, forgotten where it is that they came from, and it's this 'eternal cool' factor, an eternal relevance, which is one of the most attractive aspects of their existence. Enslaved is one band that I know I can trust, that I can always take seriously, that doesn't ever seem to put out a record for the sake of it, and yet has enough professionalism to keep the content flowing along at a normal pace. There are those that will forever denounce anything this band has written since Frost as high brow intellectual pap for neckbeards and progsnobs, and their opinion is very unlikely to change with this 14th full-length, but yet again I've got an album here that I feel I can share with those who lounge on the periphery, or outside the den of extremity, an easy recommendation for anyone that just likes good music, that you can either chill out to or rage alongside in equal measures. And I predict it won't be the last. Thank the nine realms for plans that backfire.