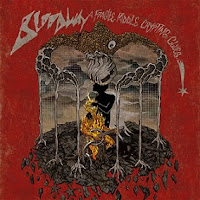 The elephant always in the room with a Bloodway record is that the band is an auditory vehicle for one of the most unique, compelling visual artists in the entire metal medium, Costin Chioreanu. Hell, even on a bad day, this man's cover and graphic design work is more fascinating, abstract and eye-catching than nearly anyone else out there, so when A Fragile Riddle Crypting Clues arrived, or its predecessor Mapping the Moment with the Logic of Dreams, I must have spent ten minutes just looking at the things before even daring to explore the music itself. No pressure. Thankfully, ever since the first EP back in 2014, the Romanian three-piece has delivered an experience aurally that can rival its imagery, a hybrid of progression and extremity that circles the drain of its black metal ancestry but then runs off in rivulets in a myriad of directions without sacrificing a coherent musical narrative.

Hypnotic, atonal ambiance and poetry inaugurate this sophomore full-length before the tumultous chords erupt, coiled and dissonant but with a subtext of melody that creates a warmer feel than your garden variety newsprint black metal. Costin proscribes to the tortured soul, huffing style of snarled vocal which is slightly higher pitched than many of his peers, suicidal in shape, and very likely to drive half the potential audience mad within moments of hearing it. I am not in that half, because I appreciate the strange contrast it creates against the busier, roiling mold into which the riffs are formed. Organic rhythm guitars teeming with melancholic chords, whether configured into pure black metal chords or flights of thrashier picking, often with an alien feel reminiscent of a band like the mighty Voivod, though that is not always the rule. Nicely balanced bass lines that often hum just below the frenzied fretwork, but occasionally swell up to a more distinct, popping fervor with a few curious lines of their own. The drums are splashy, constantly attentive, and laced with the fills and footwork requisite to fulfill the demands of the eclectic riffing progressions.

I want to say I'm reminded of high-brow progressive metal acts like Opeth or Cormorant, only with a lot more natural, less processed, less 'safe' tone and structure to the guitars and presentation, and capped off by vocals that are far more in the vein of bands like Weakling, Bethlehem or Burzum, but not copies. The album is super well rounded in terms of how harsher passages are countered off by gentler moments and then swung back around to a passionate, frenzied crescendo. You'll find differently structure riffs and harmonies in all the metal tracks, revealing that Chironeau is well-versed in a lot of metal beyond just the blackness at the core of the project, occasionally glazed with gloomy pure heavy-metal or progressive rock. The guy has been in a large number of other bands in the past, and you can tell he doesn't cast any of those aesthetics aside, instead inserting them whenever they flow a track in an interesting direction. There's a real treat, a novelty in listening to a Bloodway album that puts them easily into recommendation territory, especially if you're into eclectic stuff like Blut Aus Nord, Deathspell Omega, Enslaved, or other entrepreneurs in the medium. Never less than impressive, if you're willing to decode the nuances.