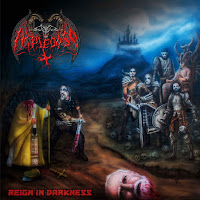 It's a little rare to see an album like Reign in Darkness these days, because clearly this hearkens back to a time when the theatrics of black metal were more openly embraced, in the heart of the 90s when the genre was still the shock rock of extremity. You think back on bands like Immortal, or Marduk, Maniac Butcher, or Lord Belial, corpse painted warriors who, while seemingly dead serious through their lyrical choices and themes, might just know how to offer the audience a bit more of a lighthearted duality which endears them. There's nothing 'cute' or funny about what Brazilians Impiedoso throw out there musically, though, but instead a very stripped down and primal form of black metal which also dates them back to that same visual era, albeit with a couple of tweaks that ensure they don't just come across as a shameless knockoff of those I named dropped earlier.

This record does possess its share of blasted abandon, where the frantic beats accompany melodic, classic Swedish-style picking passages into a blitzing maneuver, but there are just as many if not more moments in which the stuff is played slower or mid-paced, with very simple chord patterns that, if not nuanced or unique, at least aim at being catchy enough to carry the listener through. In fact, on tunes like "Domination", the jagged little guitar melodies and the way rhythm licks are constructed remind me a lot of Hellenic staples like earlier Rotting Christ or Varathron, but they also utilize darker harmonies which seem like they'd be better off glazing a doom metal trick, yet are present in some build-up to another of the straight ahead charging sections, where as some of the pure melodies which ride over mid-paced fare often recall sulky atmospheric black or death like another Greek band in their heyday, Septic Flesh. Despite that, the band never really transforms into any form of pure or obvious 'death' metal whatsoever, just an occult proto-black metal style that likes to pace itself out and provide some variation rather than just endlessly looping blasts.

The vocals are a rasped, raunchy style which sounds fiendish if not highly unique, and offers up a caustic and nihilistic contrast against the much warmer notes and chords being fleshed out of the guitars in tunes like "Eu Vejo o Fim". The guitars sound a little bit dingy for this style, where they might benefit from a little more muscle, and I also felt the production on the rhythm section could have been a little better, the drums more powerful and refined, where here they seem a little too brash against the melodies, not the fault of the beats themselves. Bass lines often just traipse along with the guitars, which is old hat for this genre but could be varied up a little more. Overall, I actually like the sincere, raw aesthetic of the recording, it's just minor nitpicks on particular pieces of the kit or guitar riffs that don't quite gel together as they might in a more seasoned, balanced mix. But at no time does the music get obstructed, it's always pretty clear and I think they have a well-rounded approach to their style which you never really heard on bands which committed more fully to dissonance and speed.

Reign in Darkness isn't going to blow your mind, but I think it serves well enough as a slice of nostalgic early occult/black metal which might have appeal for fans of those early Greek years of 1993-1995, balanced with some Scandinavian aesthetics and then even a fraction of the low fi and melodic atmospheres pioneered by Czech legends like Root and Master's Hammer, or even the Italian cult horror metallers Mortuary Drape. If you're seeking out more of a onesided brand of extreme black, there's not much here to offer you beyond a few wholesome bars of blasting, but if you wanna be drawn back about 22 years to the emergence of second wave acts who paid heed to as much Mercyful Fate and NWOBHM as they did Mayhem and Bathory, then Impiedoso has latched on to a style here that through further refinement could grace many a black altar at midnight.