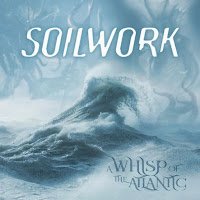 A Whisp of the Atlantic represents something a little different for Soilwork, an epic-length track the likes of which you'd expect from someone like Opeth or Dream Theater. Fortunately, the Swedes decided to delegate this to its own EP rather than clutter up the rear end of some prospective new full-length album. I had mentioned in an earlier review that I felt like some of Speed's side project material was bleeding back into the Soilwork sound, and honestly that has never been more evident than here, a number of his vocal lines, the bass grooves and such sound like some of the harder rock material from Night Flight Orchestra, but as a fan of that project, I can't quite condemn that as a bad thing, because it does sort of filter through the proggy influences Soilwork had been cultivating for several decades.

The 16 1/2 minute title track is a success in that it expresses the band's range without ever feeling too meandering or disjointed, there's a lot of mid-paced stuff here with some proggy guitars over simpler chugging chords, cleaner sections with a huge 70s rock influence (Boston, etc), but the band never quite goes full bore in terms of the speed and aggression the Swedes showcase elsewhere. They save THAT for some of the other tracks on the EP, like "The Nothingness and the Devil" with its thundering double bass and gnarly growls, or "Feverish" with the head-spinning blast. All the other tracks do maintain that prog side, but they mix it with much more intense parts that will probably satisfy anyone who thought "A Whisp..." itself might be staring at its feet too often. I won't tell you that any of the five tracks here are going to make a shorter Soilwork playlist, but they are for the most part satisfactory and on par with surrounding full-lengths. They seem to be incorporating so much great musicianship, solid arrangements, and melody but the hooks just aren't always landing.

Still, this EP has good production and enough dynamic range and riffing to keep one content for a spell, these Swedes at their most mature simply do not miss, there is too much ammunition in the arsenal, and a wide array of influences among the roster that consistently have them refreshing themselves. A Whisp of the Atlantic is just as worthy as most of their other modern material.