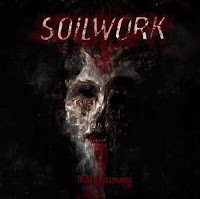 Although I was particularly interested in Death Resonance for acquiring the material from the Beyond the Infinite EP, it turns out that this is the exact sort of bananas, fans-first sort of compilation that is well worth your time, crowded with bonus tracks and other material that you will probably want to get your hands on if you've been continuing to follow the Swedes through the 21st century. A whopping hour of content and 15 tracks that very well might be exclusive to you unless you're the sort of completist collector that has every rarity, every import on hand. In fact, Death Resonance kicks off with a pair of brand new original tracks which were laid down specifically for this release as an added bonus, so you know the guys wanted this to be something substantial.

Now, the caveat, while these new tunes, "Helsinki" and the titular "Death Resonance", show all the effort of recent studio recordings, I'll admit to not finding either of them that memorable. They're definitely worthy of the level of composition they were putting together for The Ride Majestic or The Living Infinite double-album, but they don't rattle around in my memory long after the dust clears. But there are plenty of other highlights present, like "The End Begins Below the Surface", a Japanese bonus track off the previous album, or the ENTIRETY of the aforementioned Beyond the Infinite EP, which in my estimation represents some of the stronger material from the whole Infinite era, in particular "My Nerves, Your Everyday Tool" and "Resisting the Current". The remainder of the material is a whole slew of Japanese bonus tracks from The Panic Broadcast, Sworn to a Great Divide and Stabbing the Drama, including a swank re-recording of "Sadistic Lullabye" off the debut album...

These can be hit or miss, and the production on cuts like "Overclocked" and "Martyr" isn't quite as strong as the first half of this compilation, which almost flows together like a new Soilwork album; but it's still nice to gather them all in once place, and nothing is really less than pleasant to listen through. I'd also like to say that some earlier bonus cuts might have also been nice, perhaps including the Early Chapters EP, but some of those are obviously represented on the de facto versions of the CDs that are available today. There might not be much of my favorite Soilwork material present here, but as a product Death Resonance delivers the kind of experience us jaded old heshers desire from longstanding bands, rather than some soulless collection of album cuts with a few live cuts or bonus tracks tacked on as an afterthought.

Posted by autothrall at 9:01 AM