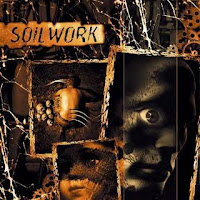 It would feel a bit unusual calling A Predator's Portrait a 'step down' or a 'disappointment', because it's still a pretty darn good album, armed with a couple tracks I'd be happy to place on any Soilwork playlist. It's also sort of a direct blueprint to their direction for the next couple albums after it, but the fact remains that a couple of the tracks on this one never really permeated my musical tickle-zone, and even on some of the better tunes they'll veer into a riff or bridge that doesn't always have me hanging over the replay button. But putting it in context, this is by no means a dud of a faltering, at worst it feels like an extension of The Chainheart Machine which attempts to settle the music into a little bit more of an accessibility and groove. The pop and prog influences of the band's future are still quite far away, but some of that explosive At the Gates/mid-90s Swedish melodeath foundation is starting to chip away as Soilwork builds more of its own identity.

Speed is going for more clean vocals here, although he's still keeping them a bit restrained to a medium range ("Like the Average Stalker", "Needlefeast"), not as confident as he'd become later. The growls and rasps are still the primary vehicle for his performance, but he's swapping these things off pretty often here, creating a beauty & the beast microverse unto himself. The synths adopt even friendlier sorts of tones that you'd equate with atmospheric prog rock, and some of the leads are also starting to take on that nature, though they are consistently decent. The rhythm guitars are chunkier and chuggier and seem more heavily focused on both 'the mosh' and letting the thinner melodies serve as a counter, whereupon the first two albums it all blended a little more seamlessly. Still, there are some pump up riffs that get the blood coursing through you, and some of them seem like direct prototypes to later, better cuts. The band occasionally adopts some bluesy low-end metal grooves for the breakdowns, which for me shows a slight inspiration from the groove/nu metal of the 90s, although they had done this a few times earlier.

Now, a lot of these quips might seem like complaints, but that's not really the case, because A Predator's Portrait is still a busy album showing no lack for effort, especially in adjusting to the cleaner vocal alternations. There are no tracks whatsoever that I would consider outright bad, but a few of them just aren't as catchy as I would have hoped. I really do like of the flow of the record, from the passion and emotion of the harder moments to the little spikes of melodic, choppy picking. I feel that Soilwork might have been experience such an abundance and confluence of ideas in this first 5-6 years of being a signed, touring act, that they were releasing studio product at a rate just slightly higher than their own potential, and while some albums really delivered on all of this promise, A Predator's Portrait came up with one of the shorter straws. That said, I have known a few individuals who cite this as their personal favorite from Soilwork, and I can't blame them too much, a few of the rhythmic patterns here form a direct basis for tracks on my own.

Posted by autothrall at 8:50 AM