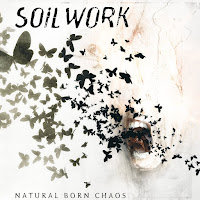 Natural Born Chaos feels like someone took all the components of its predecessor A Predator's Portrait, threw them into a stir fry and, as if by fate, a more brilliant and memorable concoction emerged. This is my favorite Soilwork album, and one of my favorite albums EVER within the melodic death metal medium, right alongside The Jester Race, or the comparably modernized Damage Done by their countrymen Dark Tranquillity in the same year. Literally every second of this album evinces either an instant adrenaline rush, or an emotional nostalgia from me. It's arranged beautifully, with every track arriving at the point where it will have the most impact on the listener, and all of the ingredients the band were experimenting the year before have swiftly borne fruit.

The band chose the perfect producer/engineer for this album in Canada's legendary Devin Townsend, who clearly helps emphasize the more progressive and atmospheric sheen as it was likely influenced by his own projects like Ocean Machine or Strapping Young Lad. Together they really seemed to deconstruct the grooves, the leads, Speed's myriad of charismatic vocal styles, synthesizers, and percussion and then LEGO them together into something immediately more accessible. His harsher vocals dig more into a Phil Anselmo-like badass machismo without fully abandoning the Lindberg rasping capacity, and they sound great, but it's the cleans, the harmonies that have really come forward here, and along with the brighter and more interesting synthesizer tones they create a ton of the atmosphere, especially when they are drifting over some of the instruments' darker passages. The drumming is fucking great, the guitars manage to harness all the influences of thrash, groove, prog and melodic death into a riff-set that is NEVER shown up by either of the aforementioned.

There are no weak tracks among these, every song is a hit for me, from the pent up power of "Follow the Hollow" or "The Flameout", to the proggier synth-endowed numbers like the title track or "Mercury Shadow". Choruses are absolutely epic throughout, and every track has subtle, memorable licks all over the place, thus it's tough to pick favorites, but if I was on a short car ride or a quick gym rep I'd likely smash "Mindfields" or "No More Angels", concise and immortal blood-pumpers that never fail me. Not that any of it fails me, really, I listened to this album (and the comparable Damage Done) hundreds of times when I first got them, I think I remember ordering them from The End Records way back when, and they just became instant posterchildren as the 'future' of melodic death metal, since they had all but stripped much of the 90s cliches to sound more contemporary and forward-thinking...

Now, maybe that future didn't always pan out, since a lot of attention shifted away from the niche later, but at the time it was riding on a lot of hope and potential, feelings that this album still wells up within me, even today in 2023 as I sit here reviewing it. I still feel like I'm hearing a glimpse of tomorrow, a retrofuturistic evolution upon the Whoracles and Slaughters of the Soul, which I like even more than any of those seminal pieces. If I had any critique whatsoever it's that the bonus track "Kvicksilver" just sounds like an amalgam of ideas from other, better ones, but it's not part of the core experience, and as I mentioned, there are already riffing sequences or ideas here that feel as if they were directly lifted from A Predator's Portrait and dramatically improved. Otherwise, Natural Born Chaos is just my jam, a record that makes me smile for 42 minutes straight, that makes me want to scream, to move, vital signs rising and falling with each riff, each fill, each vocal phrasing.

Posted by autothrall at 9:48 AM