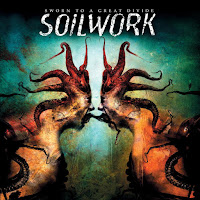 The 2005-2010 era of Soilwork is undoubtedly my least favorite, not that it's terrible, but there seemed to be a neutering of the astonishing potential of their early material, like they hit a brick wall around Figure Number Five and the only way to go was more polished and poppy with Stabbing the Drama. Fortunately, they were pretty quick to issue a course correction on Sworn to a Great Divide, an album that might not rank among their most memorable, but carves back towards a more distinctly metallic direction and has a lot more going on to entertain these ears, while keeping the great melodic chorus parts on board so Speed can keep honing his pop chops for future projects. In fact, going back to explore this one I think I've grown a greater appreciation than whenever I first heard it.

Certainly the formula on tunes like "Exile" is directly descended from Stabbing the Drama, but through the production and songwriting it just seems more effective and atmospheric to me, there's a greater resonance to the mix and it's not so direct and over-polished. Lead guitars and melodies are consistently worthy throughout the track list, and a lot of the rhythm guitars were written with a more fiery and thrashing intensity, clearly drawing upon the first few albums. Thusly, the chorus parts here feel a lot more epic and deserved, and the band seems to have realized it went a little too far the last time out. Don't worry, if you were really feeling the Swedes at their most commercial, a lot of those grooves still remain, you can still play this stuff in the closing credits of an MTV tween horror/drama or maybe even risk it on the radio after a block of Creed and post-1988 Metallica, but it's quite ironclad in production and there aren't any stinker tunes that I ever feel are mandatory to skip.

At the same time, it's difficult for me to point out highlights, because the tunes here are just consistently 'good' and never truly great. The material at its most thrashing clip ("The Pittsburgh Syndrome", "As the Sleeper Awakes") is on the same level as the catchier pieces like the title track, "Breeding Thorns", or "Your Beloved Scapegoat", the slower grooving of "I, Vermin" with its guitar harmonies fluttering over the shouted breaks, there are even a small handful of more genuinely mean sounding riffs or vocals that pop up from time to time. Ultimately, Sworn to a Great Divide feels like the band blending their roots of Steelbath Suicide and The Chainheart Machine with the more accessible direction of the mid 00s, and pulling it off, with only a few individual moments that come off too sappy. This is one case as I'm treading this discography where an album has appreciated in value for me.

Posted by autothrall at 8:56 AM