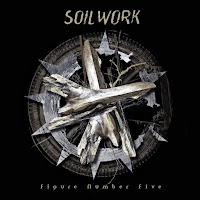 Coming off an album as strong as Natural Born Chaos, there was likely little to no chance that Soilwork was going to match itself, and that is precisely how the course of events would pan out, especially in lieu of the band continuing to crank out such a level of productivity. A year passed, and while I was still in the throes of heat for its predecessor, Figure Number Five arrived. I admit that, at the time, I felt like this was an album composed off some left-over ideas or cutting room floor materials that just weren't good enough to qualify for the last few, but in hindsight that was probably premature. The album largely lacks the dynamic strength of the last, and it does seem lazy at times, in particular the heavier riffs and grooves, but at the very least it's consistent and smooth and maintains a high production standard.

There are a few dreamy, catchy cuts on the album like "Distortion Sleep", "Downfall 24", or "Overload" with its great verse grooves, cute little bouncy synthesizers, and memorable chorus; some of these do arguably forge a fraction of new terrain, but just as many others tend to blend together and don't have a chorus or single riff that really impacts me. Speed's vocals are on roughly the same level as Natural Born Chaos, but they don't have as much to really say when the songwriting doesn't always set them up well. The synthesizers are fine, but I feel a few of the tracks here might have been improved if they added something a little fancier to show for themselves. Otherwise, I can't exactly describe the content here as particularly 'bad', since it's a fully listenable album, doesn't waste too much of your time and also does continue some of that positive, uplifting, potent vibe that the previous album mastered.

I definitely think this one might have suffered from that prolific the band were on, even more so than A Predator's Portrait. With another year or two between these full-lengths, a bit more variation could be achived, a few chorus parts sharpened, and they might have turned out stronger. As it stands, there aren't even many lead guitars on Figure Number Five that I can remember, which were a real positive for the band before this point. If I were putting together a longer playlist of their material, I'd probably include a few of the songs I mentioned above, maybe "Brickwalker" too, and ultimately this is one I can listen through without ever feeling too letdown or pissed off, but I'm just not going to pull it down off the shelf when I can head for The Chainheart Machine or Natural Born Chaos instead. Probably good enough to keep the the band's momentum intact, but nothing bordering on mindblowing here.

Posted by autothrall at 8:52 AM