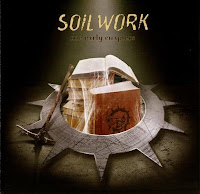 Soilwork did manage to take a small break in between Figure Number Five and Stabbing the Drama, perhaps curbing any real burnout from occurring as they were blowing up all over the world. In the interim, fans were treated to this confusingly titled EP, The Early Chapters, which would have led me to believe it was comprised of demos like the bonus disc of Figure Number Five had, but is instead of some random material put out purely for fans' sake, perhaps to rake in a couple bucks in the downtime. These sorts of releases often feel pointless in the long run, because there's no real aim or direction to how they're assembled, but at least this had a few tunes that felt exclusive at the time.

Speed has done a lot of covers, such as his more recent YouTube projects, and creating an entire awesome band (The Night Flight Orchestra) which feels like it might as well be covers, but here we get a few early examples as the band does their rendition of Deep Purple's "Burn" (with guest female vocals), and Mercyful Fate's "Egypt". The first is fairly mediocre, as the band sticks rather close to the original and then just smatters the raspier AtG vocals all over it, but the latter seems more ambitious, and the intensity of the drumming and riffing in that song does suit his screams and snarls a lot more. I also found the production of the instruments on the latter to be quite good, though the vocals could have been mixed on there better. Anyway, we at the very least know the Swedes had some good taste, and how could not to produce some of the albums they had already?

There's a demo for "Shadow Child" off A Predator's Portrait which honestly sounds good with the levels of the vocals, guitar and synthesizer, I might even agree with this production a little more than what ended up on the full-length. A live version of "Aardvark Trail" doesn't fare so well, the drums and guitars have enough volume but the overall sound seems rather hollow when the bass and rhythm guitars kick in. Lastly, there a vicious original called "Disintegrated Skies" which is solid, with a few nice dual guitar leads, but otherwise isn't really strong enough in its riffing outside the bridge to have made a splash on any of their full-lengths, so nestling it in here on a forgettable EP seems like the plan. And that's kind of the problem here, it's just not that strong...the Fate cover is arguably the best part, but nothing necessary to track down unless you can nab this as a bonus disc or part of some greater compilation down the road.