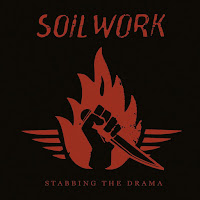 Stabbing the Drama is the point where I fell off the Soilwork train for awhile; I wasn't terribly impressed with the album when I first heard it, not because it was some drastic 180 shift towards further accessibility, but I felt the band was hitting its peak mallcore-adjacent phase, where they were focused on the similar grooves and radio choruses that the modernized In Flames was, running parallel to a lot of obnoxious US metalcore bands who adopted those same contrasting elements. As I listen back on it now, I was partly being delusion, Stabbing the Drama actually highlights a lot of similar structures and songwriting to my favorite of their works, Natural Born Chaos, and I wouldn't even say it's really dumbed down that much, but I still consider this one on the lower tier of their releases.

This album is probably hitting the heights of the smooth production, and simpler construction, but the band still maintains a mildly proggy edge, some quality lead-work, and a concentration on writing the biggest chorus hooks they can muster. There's very little of the thrashy melodeath propulsion here, it does appear on a few individual riffs but like Figure Number Five before it, this is a lot of mid-paced grooves that are built to setup what they would hope to be memorable chorus parts. Unfortunately, a lot of them come off rather bog-standard or similar to one another, like "Weapon of Vanity" to "The Crestfallen", the latter of which is probably my favorite here. The heavier riffing in this and others almost reminds me of Machine Head or Skinlab, functional grooves, only the melodic component is far superior, pushing it over the heads of those lackluster acts. The polish on this album certainly gives one the impression that it's the closest the band would get to pure nu metal, with a lot of segues where the band basically canters along with some alt rock sounding parts to let Speed wax emotional, to contrast against some of the most Anselmo-like growls he's put to tape, emphasized further by that aforementioned production.

I probably come across as pretty down on Stabbing the Drama, and that's more or less the case. I've had a wavering relationship, with an initial aversion, a gradual warming towards, and ultimately only a lukewarm response. For sure there is an EP's worth of material that I'd love bouncing around to in my car ("The Crestfallen", "Nerve", "Distance", maybe "Observation Slave"), but otherwise I find a lot of what the band wrote here pretty forgettable when intermixed with the rest. The pop and radio rock thing was probably appealing to a rising band like this, but they have so many weapons at their disposal to forge into a more interesting direction. It's not the worst Soilwork, and even the WORST Soilwork isn't all that bad, but it's never one I'll reach for when a couple spaces to the left on my CD shelf I've got that streak of four great records that they kicked things off with.

Posted by autothrall at 8:55 AM