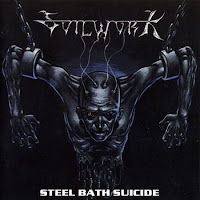 By the later 90s, metal fans the world over were in such a froth over At the Gates' seminal Slaughter of the Soul that the Swedes had spawned myriad doppelgangers, whether directly aping that aggressive, melodic death attack or fusing with US metalcore breakdowns and clean vocals. You couldn't escape it, and a number of that record's protegees would go on to massive careers that arguably eclipsed the original what with their now-reconvened hiatus. Although I liked that record alongside the next bloke, the former gatekeeper in me was just not down with some of the more overt impostors trying to spin a buck, but found myself challenged with two Helsingborg bands that, for my ears, had already iterated upon that classic in positive and exciting directions. Now, I've already gone over the excellent Darkane at length, but what of those better-known wunderkinds Soilwork, who rode that horse to broader, more progressive lengths, and have enjoyed a transition from explosive hype to decades of consistent releases, with only a few lulls here or there?

Steelbath Suicide was unquestionably the closest they'd ever sound to the formidable AtG, but it was already at an evolved state due to the presence of the keyboards, the bigger chorus hooks and the more friendly style of lead guitar and harmony involved. It's as if someone took Slaughter of the Soul as the base and sprinkled in small amounts of Helloween, Dream Theater and another Swedish melodeath juggernaut of those times, In Flames, whose uplifting guitar rushes and dual harmonies clearly informed a number of the riffs here in tunes like the title track which could have appeared on Colony or Clayman with a few tweaks, or "The Aardvark Trail". In fact, the one really binding element are Speed's early vocals, which are quite close to Tomas Lindberg in sneering disposition, and like me, if you've spend many years listening to the guy across his collection of projects, you'll also remember that this is one of his more limited performances. It gets the trick done, and certainly there are a few riffing passages in tracks like "My Need" or "Sadistic Lullabye" that are likewise redolent of Slaughter tunes, but they open up their strings far more than he opens up his pipes through the eleven tracks here.

But don't get me wrong, this record is quite great from the onset, as we're smothered with the warm and resilient melodies of "Entering the Angel Diabolique", a 2+ minute instrumental that instantly catapulted them upon a potential higher tier of the niche alongside the aforementioned acts and Dark Tranquillity. There's a little bit of Jester Race vibe going on there, which is a ok by me, but you can already feel the presence of the synths, a few clean strings buried in the mix, and just a confidence that you are about to be treated to a fully satisfying experience, which you are. The tirade of clever, riffy cuts to follow this one are one of the most concise and consistent in the band's career..."Sadistic Lullabye", "Skin After Skin", and the incredible "Wings of Domain" are all well-worthy of a "Blinded by Fear" or "Slaughter o of the Soul" proper, and due to the presence of the extra instrument, they bring an atmosphere that was not present in that style prior. The intricacy and intensity of the track list does not abate there, as it's an album you can still listen straight through to this day, but a few of the tunes might fall a fraction shorter in the memorability department.

It's obviously one of the most guitar-driven of their efforts, and the dynamic range is palpable, from the thrashier bludgeons, to the catchy chorus chord patterns, to the well-developed leads that almost seemed out of place for a band this young. Soilwork was clearly bringing the breadth of classic and progressive metal to that trending melodeath intensity, and some of the solos on this one are among the best they'd ever record. The production is pretty good, perhaps a little washed out by loudness war standards, but you can hear everything clearly, and I feel like the more processed, cubicle tones on the record were an aesthetic that did match up the futuristic artwork and contemporary lyrical themes. If you wanted Slaughter of the Soul to Enter the Matrix, well here you have it. There was also a groove metal element present even here, something they'd explore more blatantly later on, but it was tasteful and even used to great success in, say, "Demon in the Veins", when Speed starts screaming in the chorus and the little flourish of melody caps him off over the churning rhythm guitar.

Jimmy Persson's drums were solid, it really takes a lot to keep up with such an all encompassing style, but he does so with room to spare, so even though he wouldn't be sticking with the band, he helped them off to the races. The synthesizers also perform the difficult task of having their presence felt in certain spaces without ever cluttering up the other instruments, so one shouldn't expect the showiness felt in more distinctly 'prog metal' bands...that will increase later. All told, this is an album that feels just as impactful as when it first dropped, perhaps not ever my favorite but certainly the catalyst for what remains my favorite period in the band's discography, a reliable evergreen that I'll still be breaking out every year or so.

Posted by autothrall at 8:50 AM