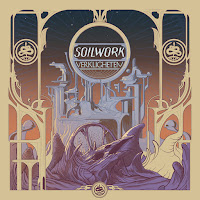 Just looking upon Verkligheten, without playing a single note, you can tell that something's different. Valnoir's artwork has an almost Roger Dean quality to it, leading me to believe that Soilwork might be venturing into a more purely progressive rock/metal territory, something they'd always flirted with but never completely capitalized on. The title of the album is in Swedish (for 'The Reality'), also a first in the band's catalogue, and the entire thing gives off a conceptual feel. Well, as it turns out, this is indeed the most broadly ranged record the band would have put out to its day. I tend to believe that the groups' side projects, like Speed's Night Flight Orchestra, might have rubbed off here, not in that it attempts to pull on all that wonderful 80s cheese, but just as a catalyst to spread the wings out wider, catch a few new airstreams...to an extent.

Because if you were worried that the Swedes would somehow drop the lavish, propulsive melodic death metal that made them, fear not, because Verkligheten really balances the scales. In fact, the heavier moments on this one draw me right back to their formative years, only they're attempting some new twists on the melodies, new rhythmic configurations and vocal layers, and it makes for a welcome contrast against the album's quieter, more accessible moments. I think that the progginess does exist here, in the classic organ tones, the softer segues threading through pieces like "Full Moon Shoals", but as the full album unfolds these are clearly in the majority, and this is largely recognizable as pure, passionate and aggressive Soilwork threaded with plenty of harmonic chorus parts, excellent musicianship all around, and one of the smoother productions of their catalogue, just as welcoming as any of their more commercial fare (Stabbing the Drama), but still ready to drop the hammer on you with a harder hitting, more technical performance.

I can't cite this as a personal favorite, but there are quite a few interesting tracks like "Needles and Kin" with its punchy, unique riffing below the growls and chorus, or the intense "When the Universe Spoke", fast and modern and dramatic but possessive of textures and melodies that remind me of in spots of proggier rock from decades before it. I have no problem spinning this one from time to time, and it reminds me a lot of The Ride Majestic just in how it proves there is plenty of fuel left in the tank, an incessant stream of creativity and development which remains loyal to the band's original goals while feeling fresh, very few moments of Verkligheten feel derivative at all of the band's now substantial back catalogue. You could connect the dots on some of the vocal parts, maybe a small handful of riffs, but here is a highly seasoned band propelling itself fearless into both the future and past, building something new out of both ends.

Posted by autothrall at 9:02 AM