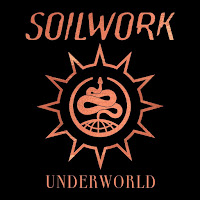 As a poor sucker whose copy of Verkligheten did not include the bonus content comprises the Underworld EP, I had to check this one out digitally as it became available for a download. And frankly I am happy that I did so, because at least two of the tracks here are among my favorites the band has released over the last decade, and in fact all three of the tunes new to me here are great. There's an alternative version of "Needles and Kin" which is perhaps the one component here I don't care for all that much, it's a little more blunt than its counterpart but I don't know that the differences are broad enough to justify it, I had no issue with the version of Verkligheten and rather enjoyed it. So this is not completely fire, but it certainly struck the top of my thermometer.

"Summerburned and Winterblown" is just awesome, with its snapping pace, weaving melodies and emotional riff-fest, and this should EASILY have been featured on the full-length, along with "In This Master's Tale" that opens with a strong melody bringing to mind all those Swedish greats, in particular the In Flames of the millennium's turn. Again, this one is just as memorable for me as most of the other tunes on Verkligheten, Speed powers through with a good mix of harsh and soaring vocals and it just feels like this warm, epic surge. "The Undying Eye" is likewise worthy with its great exhibition of pinpoint prog metal riffing and occasional crushing chords, flashy but grounded at the same time. I mean, outside of The Ride Majestic, this trio of tunes might be the most exciting I've heard them, it all fits in well with the full-length material, of course, but there are certainly three tunes there that these could have replaced. However, I realize most of you are not schmucks like I am and probably have the nice digipack which includes it all together, so praise be to you! I will upgrade, I'm sure.