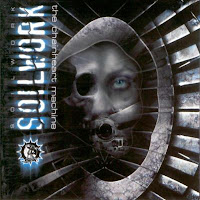 The Chainheart Machine isn't so much a major embellishment or evolution upon the style of the debut, but rather a 'tightening' or 'cleaning up' of all Steelbath Suicide's elements into an even more effective array of proggy, thrashy melodic death metal which seems so energized and inhumanly efficient that you'd think they were hardwired to some glowing tank of testosterone. I cannot deny that this album rules and remains one of the best they've ever released, and I think I can pin that down to two specific elements. First, the production is a little cleaner, punchier and therefor more potent than the debut, and while its predecessor sounded fine (and still does), this mix is more able to rein in all the weapons at Soilwork's disposal. Secondly, the new drummer Henry Ranta brings an added level of muscle to his performance which both honors and surpasses his forebear, while contributing to just how pinpoint accurate these tunes are.

Every freaking song on this record puts in the work, throttling you with explosive riffs and melodies, an incessant battery of grooves and fills, and some sort of epic break that makes you want to flail around a moshpit of wire-strung angels, like the point in "Millionflame" where the propulsive verse riff peels away to that groove and the great, controlled leads erupt. Like Steelbath before, it, this one is definitely one of the closer efforts to that Slaughter of the Soul sound that obviously influenced it, and to that end it is quite the competitor with its bevy of more plotted-out, intelligent rhythm guitar riffs, a total modernization of thrash for the 90s and oughts. It's still one of Speed's more constrained performances, but I think here he sounds a little more vicious than on the debut, and also he's mixed a little better. It might be that this would be the first Soilwork album I'd point out if somewhere were pursuing more in that mid-90s popular style, but don't mistake it for a clone, it still goes over the top in musicianship, and so many of the ideas applied to that core death/thrashing construct feel fresh and compelling and remain so to this day, even where it goes into a dumber, bluesy groove like the depths of "Machinegun Majesty" and its screaming solos.

The faster moments on this record even set up to inspire one of Speed's earlier side projects, Terror 2000, which arguable takes the propulsion a little too far, but still itself produced some catchy cuts on each of its records. There are a few points where I'm listening to this one, thinking to myself that this or that specific riff might have helped birth that whole project (though it debuted the same year as this). The synthesizers continue to blend in seamlessly, although I think they are starting to adopt some tones and pads that are more often equated within the prog metal scene. Lyrics are also quite interesting, I like when all these European bands in melodic death or black metal were putting together all these new compounds like 'Chainheart', and that's all over the place with the song titles here and even some of the lyrics, with are otherwise these intense emotional outbursts which fit the modernity of the band's style well. I'd say the downside is that it also bridges them over into the radars of the more nu-metal oriented crowd, to which they did crossover slightly at one point, but quickly re-emerged from. But there's never any question of sincerity, and the quality of the performances and songcraft here really speak for themselves. My second favorite Soilwork album!

Posted by autothrall at 9:57 AM