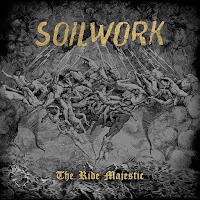 Where The Living Infinite might have had a little too much ambition and material for its own good, Soilwork would return a couple years later with an album that was more reined in, but no less epic in production and scope. The Ride Majestic was impressively arranged, with a crystal clear production that never lacks for punch, and doused in some of the band's heavier material since the first few years of their existence. The tracks here have a lot of layers, balancing off the newfound extremity with the penchant for melodic hooks and choruses which they were in no danger of abandoning. This is also another 'grower' of an album, I know it didn't receive the greatest response when it arrived, but having gone back to it through the years it just feels richer and denser each time, and like Sworn to a Great Divide, it's one of the albums that notched up in my estimation as I've torn back through the whole discography.

If you missed the metal-ness and intensity that the Swedes were always capable of, but only letting trickle through the records over the decade before this one, The Ride Majestic has your back, and this is moored by what might be Dirk Verbeuren's best performance on a Soilwork record. Speed helped write the shit out of this album, but the dual guitar onslaught of Sylvain Coudret and the late David Andersson was all up in your face with great work that melds catchy, potent rhythm guitars and melodies together in new ways that don't sound like the band are merely ripping themselves off. "Death in General" and "Petrichor in Sulphir" are excellent examples of the range here, technically proficient and yet constantly accessible, each track loaded with licks, beats and strong vocals slathered all over the top, even when the instruments are striking their most prog-laden passages. When Speed hits all the cool choruses here, the music remains relatively busy below, and I think if you were to look back at the spread of all their releases, this one might stand as one of their more technically adept.

But that wouldn't mean much without the songwriting, and The Ride Majestic is moving and emotional and inventive without betraying any of the core principles of the band. It's not a stretch to say that I wished this were the album to follow up Natural Born Chaos after a few years, it might not reach that level of veneration with me, but this is far and away my favorite album they've put out since that seminal four-album stretch of excellence which christened their career. There a few softer moments which feel like proggy platitudes, but otherwise this one is consistently rewarding me when I head back to it, and the pristine recording and veritable onslaught of fresh riffing ideas underpin a fire that I had not heard within the band's ranks for nearly 15 years before it, just a great time that I'm almost always happy to listen to when I'm not jerking Natural Born Chaos or The Chainheart Machine off the rack for the memories.

Posted by autothrall at 9:00 AM