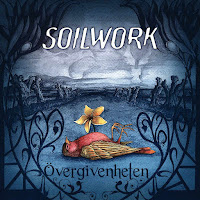 My first few spins through Övergivenheten I was quite enamored of it, impressed that so deep in Soilwork's career they were still releasing substantial, spirited, emotional evolutions upon the melodeath formula that they helped craft back in the 90s from the influence of their own countrymen, whom they now easily surpass. The cover art, once again, a fascinating turn of events from the old cyber-collage photo art they used to use, and it's yet another album with a Swedish title ('Abandonment'), leading me to wonder if they are doing this as some sort of trilogy or something. The production on this one is also to die for, a bit bolder than the previous album and really driving home all the instruments and vocals. This is yet another case where I can say that the band is not merely resting on its laurels, but trying a few new things while keeping the skeleton of their style intact...melodic death, progressive and groove metal in a blender with Speed's pop-inflected clean vocals carrying each chorus over the top.

There are some lush acoustics throughout this one, like the interlude "Morgongåva / Stormfågel" with the shredding over the top, or the great atmospheric build-up to the opening title track, but by and large this is still a steadily hammering album, albeit an extremely accessible one. Solid, meaty rhythm guitars support the harsher vocals, but melodies are never so far away as they introduce the clean, epic chorus passages. A lot of their albums have this life-affirming quality about them, with a lot of introspective lyrics aimed at the young men and women of today, and this one is no exception, and might even excel in that department, because the punch these tunes pack is quite heart-felt. The musicianship is top flight, I mean it's been a good 20 years since they've had anything but a dynamo lineup and even where a few of the players come and go, these days you'll hardly notice the difference as the core components do remain consistent. The clean vocals have grown ever more confident in turn, and Övergivenheten gives us one of Speed's most radio friendly performances outside of The Night Flight Orchestra.

All that said, in the months since I first picked it up, this album has faded for me a little. There are a few parts I consider bland and, while strongly composed, the hooks just never quite break my skin. A few of the guitar leads here also feel a bit superfluous, or rather they just don't amplify or stand out from the material surrounding them. The explosive, ecstatic parts rarely go far enough, and a couple of the tunes seem pretty filler or out of place..."Death, I Hear You Calling" clearly belongs in his other project despite a slightly more metallic chassis, and even the surging, storming "This Godless Universe" with its cresting, classical strings just doesn't slam me with that super memorable moment I'm expecting. Övergivenheten is an exercise in skill and variation, thriving on emotional heights and valleys, but the more I strive to remember it, the less I end up doing so. You'll never hear me complain about listening to it, but I'll still prefer to get my fix from other albums like Natural Born Chaos, The Chainheart Machine, Steelbath Suicide and The Ride Majestic.

Posted by autothrall at 9:05 AM