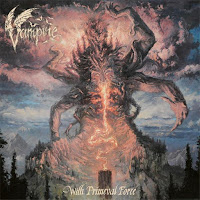 You only need a few minutes into "Knights of the Burning Crypt" to realize that With Primeval Force is truth in advertising, a more furious entry into the Vampire canon than the band's eponymous debut, and a purist continuation of the Swedish savagery of their 90s black metal scene, both the more brutal based style like Marduk, Sacramentum or Lord Belial, and the more thrashing side of things. That's not to say that this is a band to ever blast away monotonously, it's more that they carry forward the carnal riffing patterns, often somewhat predictable but still impressive just by the sheer force and consistency. But what places this band beyond that is their excellent use of atmosphere and melody to create such a well-rounded set of tunes that really bring honor to the album format.

There's also a nice influence from Germanic thrash here which becomes more obvious in a cut like "He Who Speaks" reminiscent of Kreator, and a lot of speed metal too inherent in the "Metamorfosis" riffing. Vampire is such a total package that they don't let a track pass without a few essential melodies and really ripping, excellent leads that bring to mind any number of heavy metal or thrash influences ranging from Mercyful Fate to Destruction. All of these wide array of inspirations are unified beneath the carnal and incredible rasping of Hand of Doom, and those little segues and moments of horror atmosphere that they first introduced on their debut, but are inserted expertly into the tunes like at the end of "Metamorfosis" with its acoustics and ghostly keys, or the synth and reverb that inaugurates the "Initiation Rite". The drumming is likewise excellent, just as strong as most of the rest of the mighty Swedish legacy acts, with strong double-kick, good fills and a nice natural mix that balances out against the more raw, vile power of the guitars.

With Primeval Force is certainly more of a beastly attack than the debut, yet it doesn't lose much by way of songwriting or intricacy, it's just excellently written music that services its black, thrash, and heavy metal components somewhat equally. If Dissection were more into horror movies, this might have been what they sounded like, and if that's not enough to tempt you into trying these albums I don't know what will. Metal music is such an embarrassment of riches these days that a band like this, which should be on the lips and in the ears of a vast swath of fandom, is just not one I hear spoken of much at all beyond those who are really into the mighty swell black/thrash emergent in the last decade. Vampire is on point, two points that will sink smoothly into your fucking neck. Invite them in.