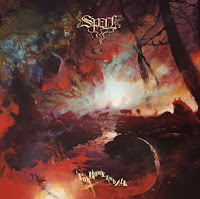 As fun as The Full Moon Sessions proved to be, there was a little sense of it being slapped together and lacking cohesion, something the Canadians Spell were quick to fix on the sophomore effort For None and All, which excels beyond its predecessor in just about every department. You've still got that sense of nostalgic 80s metal, almost like a collage of the obscure NWOBHM and Metal Blade acts from that decade, but this new album also has a bit more of an infusion of 70s hard rock and proto-metal due to some of the retro riffing, lead guitars and vocalizations. It all comes together quite wonderfully to be what I'd consider the trio's strongest work to date, obscenely catchy and just sounding tremendous coming through my car speakers. Yes, this is just another album I love to spin when I'm driving my sons around or just want a soundtrack for the wind through my beard (my old man proxy for having a head of hair), it's a highly mood-driven collection of tracks that sound just as good now as they did six years ago.

I suppose Cam's vocals are the place to start, he's got a very authentic, natural mocking tone to his voice that sounds impetuous but perfectly suited to the music, especially when it comes against the more epic contrast of something like the choir that erupts in "Whipping Sigils". The way he delivers his lines does remind me of fellow Canadians Cauldron, who also use a very down-to-earth, guy-next-door sort of vocal style, but the pitch is higher, more playful and leering. There are a few tunes in which it can feel a little monotonous, a wider range wouldn't hurt, but they're still beyond adequate. The guitars are extremely melodic, running through a rich set of patterns in each tune with one of the most wonderful guitar tones. I'm actually reminded a bit of the first two Def Leppard records with a few of those great rhythm guitars in the mix, and also by the constant crest of melodies and harmonies, but really this guy is using all sorts of effects to add in bluesy, funky or atmospheric layers as well. Graham McGee is great here.
The bass pops along audibly with lots of nice grooves or fills to round out the amazing guitar performance, and the drums sound very natural and authentic to the fusion of 70s and 80s metal influences. They also use some cool throwback synthesizer pad lines, choirs, or really whatever the moment needs to sculpt tracks that go straight into your memory, and I very often found myself wondering what decade I was in, although the music here is strong enough to conquer the 21st century. For None and All is magnificent...it might not maintain the same level ten tracks deep, but there are no stinkers in the bunch, and this should be a go-to to any true heavy metal fans heavy with nostalgia for hard rock and metal for such formative years, being thrust into the present with a style just as fun as your latest power metal or Euro arena metal obsession. Easily one of my faves of that entire retro inspired Canadian heavy metal scene!