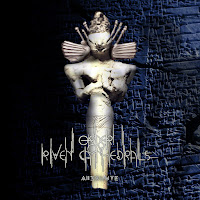 The intro to this record had a really unexpected flair to it, a mix of almost cinematic, mounting percussion, operatic background and ritualistic chants that kept me guessing on what to expect, being that this was my first exposure to Italians Order ov Riven Cathedrals. Right away, though, the band's moniker almost translates directly into their style, epic and grandiose death metal which has a certain Eastern, ethnic flair to it which I could only compare slightly to acts like Melechesh or Nile, and even that might not be fair, because while the sum 'package' of the duo's style fits snugly into the technical and brutal end of its genre, there are plenty of original riffing ideas permeating this throughout which show that it doesn't take anything more than a healthy, scant dose of influence from anyone.

In fact it even stands out against the band's countrymen like Hour of Penance, Hideous Divinity and Fleshgod Apocalypse, although fans of any of these would certainly be in for a treat checking this out, because it's written on the same level of claustrophobic ferocity and mechanical precision than any of those groups mete out. The production might have a similar level of bricked-out force, but the sole instrumentalist, '12', just flogs you with all of these intensely woven patterns of riffs that elevate above the punctual, pummeling substrate of the rhythm guitars. It's almost like you're listening to a classic late 90s brutal death record but with an added level of musicality cascading across its surface, bustling and busy and chop-heavy. The precision beats offer a stifling support for the rest of the insanity, but they're also packed with lots of fills and double-kick runs so that they can match the flexibility of the guitars, as in the chugging, awesome bridge of "Shameful Anthropic Principle" where they outpace the rhythm riffs until the sporadic splashes of filler notes that connect the moshing drudgery.

Perhaps the most anchored component of the material is the blunt vocal guttural of 'En Sabah Nur', but it's delivered at a volume where you can make out a little nuance and sincerity, even if the overall style does not distance itself from most in its genre. There is occasionally also a little bit of monotony to the overall pacing between songs, but the band hurls enough technical Cytotoxin-like flurries and melodies, and tricks through each of the compositions that it never becomes too much of a chore, and at an overall playtime of 32 there is simply no bloat in which it could wear out its welcome. The Order of Riven Cathedrals proves without a doubt (if they hadn't already) that they belong in consideration with some of the top shelf Italian death metal exports, if you want to be quickly and soundly destroyed by some no-frills tech pugilism then this is an easy go-to for the year.