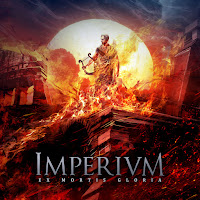 I am all about the Ancient World, and England's Imperium are all about taking all of that history, that conquest and culture and architecture, in particular of the Roman variety, and then filtering it through a lens of brutal whoop-ass that will absolutely be sending me to an appointment with my chiropractor. While at times the contrast between extreme modernity and thematic classicism can seem disjointed, there is just enough use of atmospherics to feel like it isn't out of place. But I will warn the potential listener: this record is almost suffocating in its total intensity, while the band is smart enough to let a few of the riffing sequences air out, to create some pauses amidst the pummeling, when this bands fires on all cylinders it can almost prove dizzying.

The main cause of this is the incredible interplay between guitarist Mike Alexander, a name that should probably be on everyone's lips after hearing his ceaseless volley of frenzied, fluid, complicated riffs, and the drummer, Swedish veteran Janne Jaloma (Night Crowned, Dark Funeral, Aeon, and many others), who is like caged thunder, battering his kit at levels of extremity that I hardly believe. Complement these two with a vocalist whose broad snarls, growls and howls make a necessary contrast against the sweltering complexity and you've got a force to be reckoned. I mean, Ex Mortis Gloria is really one of those albums you find yourself listening to and wondering if we've just gone too far? But then the band will reel you straight back in with a measured, elegant lead like that of "Indignitas" and keep you just grounded enough to not lose your shit entirely. If you've got a weak heart, however, this might be one you want to ingest in smaller doses, or at least turn it down a smidge from the volume I was stupid enough to experience it at.

I cannot imagine this album not taking Imperium places, for all its intensity it relies more on sheer musicality than dissonance, and while the faster material can grow exhausting, there is plenty more going on. It easily breaks the proficiency scale, its got that nice historical theming going for it akin to an Ade or an Ex Deo, and it ticks every brutal box, crumples up the test and asphyxiates you with it. Now if you'll excuse me I need some oxygen.