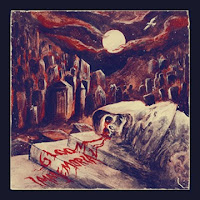 Gloom Immemorial is a fine example of what you get with a compilation when the band/label actually cares about the band's audience and attempts to offer them value and quality above a mere shell of a product. Someone could very easily take a handful of tracks off each of Hooded Menace's first few albums and then cash in, as the songs would likely sound great together and they could summon up some fancy cover art, but instead this is a collection of split 7" tracks and demo material that was probably unavailable to most of us that weren't right in on the ground floor of the band's career. That's not to say that some of the songs aren't available in other incarnations on records like Fulfill the Curse, but there's enough here to warrant inclusion on your shelf, and the Misanthropic-Art cover is also great.

For me specifically the split tracks are a treat, from the potent, limping cover of Anima Morte's "A Decay of Mind and Flesh", which they pulled from a 'mutual cover song' venture. Or the churning of "The Haunted Ossuary" from their split with the highly compatible Coffins, just a straight bruiser of a track that feels like a slow mosh through a mortuary. Or maybe "Catacombs of the Graceless" which is a fantastic track with a morbid groove that they put out on a 12" with Ilsa. Most if not all of the rare material on this is album-worthy, and that's just significant in that it shows us the Finns do not fuck around, and take everything seriously that they expect a fan might by. Now, you do get a few bits like The Eyeless Horde demo tracks which were also on the debut, but one can hardly fault them for that as a lot of folks probably want that collected, and it's, no surprise, strong material from a strong album. In fact, I'd even go so far as to say that, taking any redundant tracks off here, just a collection of the split stuff would have made a formidable Hooded Menace record...the aforementioned "Catacombs..." is one of my favorite tracks they've ever done.

This ALSO contains the two tunes from the Labyrinth of Carrion Breeze EP which was pretty recent to this, so you don't have to track that one down. Could Gloom Immemorial have been more complete? Only slightly, there was at least one EP with a few covers (I'll go over this one elsewhere) that I can recall, but with 75 minutes of slug-like, mighty death/doom like this, layered in great mournful melodies, eerie and somber leads, and measured grooves that will twist your insides into a knot, this is a pretty mandatory compilation from Doomentia and Hooded Menace, unless of course you already own all of the separate splits and such.