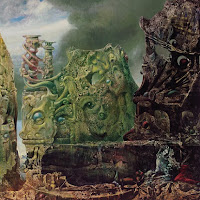 I was so hyped up on For None and All that its follow-up, four years later, Opulent Decay, felt like a bit of a letdown up front. Not like its a far cry from the sophomore outing, but the band has once again taken a bit of a left turn, and molded a few new influences into their heavily retro metal sound. Namely, there are some guitars here that give off more of the classy Goth rock vibe, and the use of synthesizers seems more like something you'd hear on an atmospheric metal record than an old Boston disc. It turns out that was I was being a bit presumptuous, because this is actually another strong work for the Canadian trio, perhaps not their best, but showing that they can continue to move along in whatever direction their imagination takes them, and bear me along for the ride.

The album is like if you mixed some Rush and Sisters of Mercy with other Canadian retro metal bands like Cauldron or Freeways. It still sounds like something that could have burst out in the latest 70s or earlier 80s, Cam's voice is much the same as it was on the last album, maybe more moody and reserved, and the riffs are still densely melodic and metallic, a lot of them dwelling in that vintage margin between glam/hard rock and true heavy metal from decades past, but almost always well-thought and catchy. But the compositions here are far more liable to throw you for a loop, they'll be treading along lightly with a melodic metal verse and then go into something a little more bottom-heavy and jammy, and it's there that the slight prog rock touches really shine through. The drums and bass feel thicker and more syrupy than the album before it, and the material definitely casts a weird vibe much like that cover art...okay, maybe it doesn't sound like a Lovecraftian hell-scape, but its not the easiest to define.

The sense of adventuring with their style is probably just as strong here as on the sophomore album, and that's the real value of Opulent Decay. Cuts like "Sibyl Vane" and the epic "The Iron Wind" just ricochet off into a million little sub-styles, from prog to heavy metal to Goth to doom. Or they'll go with a different vocal as in "Deceiver", or the awesome, mournful harmonies of the vocal piece "Ataraxia". Who the hell would expect that? There are just a lot of unexpected components to this one, and that ultimately makes it worthwhile and ties into the more epic, mystical, fantastic themes the band is exploring. And who knows just where the hell they're going to take us next? It should definitely prove interesting.