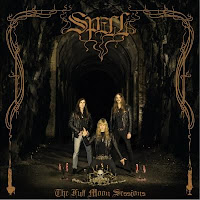 You always gotta wonder how a band lands on such an obvious, simple moniker as Spell and yet it hasn't already been taken by some legacy act for decades. I'm positive there are some other underground acts that have used it through the ages, but it's just so perfect to the type of metal these Canadians perform that it feels that the moons were really in some sort of magical alignment for all this to come together. Part of that massive Canadian blitz of the last decade that includes groups like Cauldron, Striker and Skull Fist, these guys make an strong impression right out of the starting gate with a series of NWOBHM-sounding hymns updated for the 21st century through brightness of production alone, and very little to any other nuance or evolution of the much-beloved roots of melodic heavy metal.

The Full Moon Sessions offer up a nice variety of proto-speed/power metal and then occasionally a bit that sounds a little more epic like a Manilla Road, Manowar or Omen, and they've got a nice mix here that never quite sounds the same, even the production sounds a little rawer and rougher on some tunes than on others, yet fittingly so. "Electric Witchery" has a big, booming epic metal anthem feel, where "Never Enough/Sisters of the Moon" is just a filthier force with some great little screams and picking passages. And then a piece like "Possessed by Heavy Metal" sounds like a raunchy, faster-paced Twisted Sister if Dee was using a higher pitch. The bass and drums are also good, but I think the real highlight of the style has to be the aesthetics and production which make this sound like you've stumbled across a box of old 80s heavy metal demos from bands that never really got to live the dream, or maybe a compilation tape mix that a few heshers were passing around those 30-40 years ago and now you can finally bring it to light and recognize it for the glory which its own creators never fully grasped.

It's certainly a little short, only about 25 minute if you were to clip off the acoustic instrumental "Zott Lee" from the ending. It's also little cheesy, a fraction generic, and sure you've heard every technique and probably most of the riffs on this album before, but for me it's just the right sort of tribute... intelligent in how its using influences below the mainstream of 80s metal, and unwilling to sacrifice its underground sincerity by going too polished with the production. Of the three Spell albums to date, this one was the loosest, you could argue the band might not have fully locked down where it wanted to be, but judging buy the differences between its too successors, I think this is a case of some guys who don't planning on resting on any laurels and writing whatever the hell they want at any point in time. If you want the trio's most structured and mature material, you'll want For None and All, without question, but if you love the charm and glitz of traditional under-the-radar North American heavy metal with a healthy heaping of British influence, this debut is a no-brainer too.