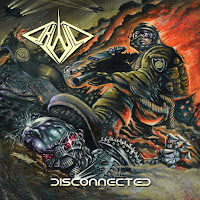 Canada. Sci-fi. Thrash metal. The first thing that comes to mind is obviously Autothrall's favorite band in the world, Voivod, but the idea of hearing other bands from that same neighborhood perform their own spin on the concept is thrilling by osmosis. DBC's excellent Universe was a great example, and certainly we've heard that on the more technical death/thrash end of the scale with groups like Martyr and Obliveon, but the more recent Droid takes on a slightly less intense approach on their Disconnected EP which feels more like a fusion of classic thrash, heavy and speed metal with perhaps a handful of crossover strands in its DNA, and a healthy degree of involved or slightly technical riffing for an added level of depth.

While I'm not going to say that there isn't a little 80s Voivod influence in there, I think Droid does a pretty good job of establishing themselves as their 'own thing'. There are a lot of dissonant guitar chords that might recall Piggy, especially in "Cosmic Debt" which is their most punkiest, quirkiest, and the most similar to that influence; but also they use some other, warmer tones, and the agile licks that occupy tunes like "Breach Oblivion" certainly feel like they have more in common with other thrash scenes like the Teutonic school. The lead-work here is pretty outstanding, and they'll often throw up some nice atmospheric melodies that ring out over the busier rhythmic substrate. The bass-work is solid, grooving along not unlike a Blacky but nicely mixed in to support those crispier rhythm guitar tones. The vocals are a pretty straight crossover/thrash bark, not terribly interesting but certainly fit to the dystopian nature of the lyrics and concepts.

My one other small gripe is in the production, it's clear but fairly mundane and doesn't always emphasize some of the power of the guitars, but this is something they will improve upon their full-length, and to be honest, at worst this one just sounds like a great demo recording. It's authentic and sometimes dirty sounding, but never too splattery like a lot of Venom-worshipping black/thrash acts (which, to be fair, I do really love). I enjoy inventive, interesting thrash and speed metal, and while Droid don't reinvent any wheels on this, they're clearly distancing themselves from a lot of the more generic pizza party re-thrash outfits and coming up with good guitar licks that balance off mystery and melody, and Disconnected was a solid launching pad for something great.