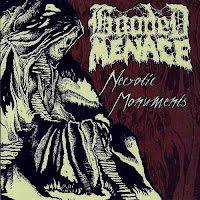 Necrotic Monuments might play it a little safe in the cover department, choosing two tracks that are doom metal related and thus fit straight into the Hooded Menace wheelhouse, but the Finns still do a great job of converting them into cuts that would work among their own set lists, and if you weren't the wiser you might not even realize it wasn't their own material. To me, that's the hallmark of a quality cover song, one that honors the original but gets converted to something fresh, not just a bunch of karaoke bar doppelganger bullshit. To that extent, while it's really short like most 7" records are, this maintains the consistency of quality that the band is known for, and I enjoyed both tracks and think they'd probably fit in on most of their full-lengths...

"Psychopath" from Swedish death/doom cult Eternal Darkness is really close to the belt, of the two tunes present this one would required less manipulation, but it's spot on as a Hooded Menace jam...with slow, mournful riffs and melodies that immediately envelop you into the Finns' trodden atmosphere. The other, "Burning a Sinner" from Witchfinder General's debut Death Penalty was the more interesting pick, since I love that band, and yet they've managed to transform that NWOBHM doomy goodness into something more crushing and fitting to their own sound. Some of that pastoral trad doom groove is certainly maintained here, and its thus a bit simpler than most of what you'd expect from this band's own catalogue, but they glaze over some of those sad melodies and then all is well. They even bust out into the most rock & roll lead they've done, but that also just makes sense with the context of the original group. The bass sounds pretty good on this one and frankly I wouldn't mind hearing the Menace tackle a whole bunch of oldies like this if they were ever to promote a full-length of covers.

As an added bonus, this comes packed with a version of Effigies of Evil on Relapse Records, so that's probably how many of you would experience it. I do think there's a Digital version of that full album, however, that also has a cover of Claudio Simonetti's "Theme from Tenebre", which is cool and shows us another side of Hooded Menace's good taste. We know they love great metal, traditional and extreme, they're also inspired by a ton of cult horror cinema. So you're not left out in the cold if vinyl does nothing for you. But even as a collector's item with just the two tunes, this is worth hearing since they show the same respect to the covers as their own material.