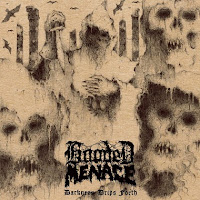 Darkness Drips Forth sounds partly like an experiment by Hooded Menace to flirt with a more funereal doom sound, not that it's quick to abandon the trappings that had defined the band to its date, but you can see in the swollen song-lengths and the slightly more glacial pacing that they were going for what might be their most saddening and serious album to its day. Add to that the rather bland (if still cool) cover artwork and you come away with what might be the most color-leeching of all their full-length albums, also fitting that motif. Fortunately, the Finns simply don't know how to fail at writing great music, and Darkness Drips Forth, with its four tracks in 40+ minutes, is quite the grower. I may not have had the same upfront positive reaction as I did with all their other albums, but I can say in all honesty that it has grown on me the most, reclaimed the most ground and nowadays its one I consider when I'm in the mood for the truly monolithic, sluggish death/doom but not quite ready to take the next step towards their countrymen Skepticism (which require another level of pathos and focus for me to handle).

The riffs on this are just as huge as other records, but drawn out appropriately to fill up the epic song lengths, and they all feel like they are being slowly carved into marble or granite, just staggering and Gothic and forcing the listener to abandon all hope within moments. The bass is awesome, slow and spun with just enough buzz on it to contrast against the mournful harmonies that are so vital to this sort of record succeeding, and often left alone a bit which is where the album actually feels more the most funeral. There are some brief flashes of cleaner guitars that are tastefully melded into the slowly lurching obelisk rhythms, and of course the gutturals here sound enormous, the perfect accompaniment to the style. It's not all death-drudging; the pace does pick up to a mid, rocking vibe in some spots, important to prevent any real monotony from setting in, and you often get a warmer sequence like that melody which sets in deep into "Elysium of Dripping Death", but that's clearly not the dominant offering.

Absolutely another quality Hooded Menace record, and it took me a little too longer to come to that realization, but I think this one is best when you're not interested in those little traces of horror kitsch humor that went into the earlier full-lengths. This is the band at its most ponderous and morose, cautiously crushing you through the certainty of their riffing strength and massive atmosphere. More of an homage to their old British Peaceville death/doom or funeral doom influences than their other efforts, perhaps, but still interchangeable with some of the material on the records that sandwiched it, Effigies of Evil or Ossuarium Silhouettes Unhallowed. Realistically, you could dive into any of their works and come away comparably impressed, but just don't expect this one to give quite the same instant gratification that you'll find elsewhere. Persist, and suffer alongside it enough, and it will reveal its morbid magnificence.