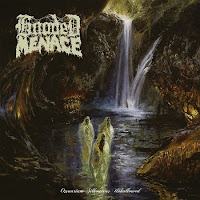 Judging by the intro "Sempiternal Grotesqueries", you'd think that Hooded Menace were continuing to pursue the ponderous, slow path they laid out through Darkness Drips Forth, albeit with a less weighty and burgeoning guitar tone. And that funereal touch certain plays a part on this album, but at the same time, Ossuarium Silhouttes Unhallowed does wheel back a little to the sounds of Effigies of Evil and Never Cross the Dead. I don't wanna say it's back to the 'fun' of the Finns formative horror death/doom, the lyrics and atmosphere here are quite brooding and despair-drive, but the way the songs are structured offers a bit more variation and covers a broader network of doom influences. In fact, after the opening track, which is over 10 minutes in length, the rest are cut down to a more manageable length.

Of all their works, this one has some of their strongest traditional doom metal riffs, I mean there's a lot of stuff here that sounds like the death metal equivalent to Candlemass or Solitude Aeternus, and I for one think that is fantastic. Same deep rhythm tones, same eerie, lower guitar harmonies, but with a cleaner production than the last album, one that services both the sluggish architecture and the peppier riffing. The vocals are fucking great, really resonating off the lamentations felt through the guitar melodies, and the drums rumble and thunder like a subterranean space of collapsing rubble. Yes, the whole album conveys a 'cavernous' atmosphere much like the beautiful cover artwork implies, and there is certainly a streak of Incantation running through here, but where most of the bands copying that stuff become insufferably claustrophobic and cluttered, Hooded Menace serenade you with beautiful, elegant melodies that just drift about the cavern space ("In Eerie Deliverance"), occasionally remembering to crush your spirit, as they do so well within a "Cathedral of Labyrinthine Darkness".

The five 'main' tracks on this one are just beastly, among the better the band has written, and then they close it out with a shorter instrumental in "Black Moss", which nicely segues into some crisp acoustics that also stick around in the ear for awhile. At that point, you get the impressive you've just been whisked away from some dark, oppressive nightmare, so it's a nice touch. Ossuarium Silhouettes Unhallowed, with its tongue-twister title, is further proof that Hooded Menace have transformed into, for my money, the most reliable death/doom band in the world. From the art and concepts, to the lyrics, to the delivery of the music, the massive production, and the willingness to toy around with their tunes just enough to keep them interesting and eschew the danger of monotony and repetition that is common in this niche. EVERY album they've put out is worth your coin, just save a few for the ferryman that will loom large over you as you're listening.