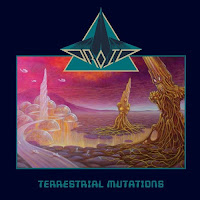 Take just about everything from Droid's Disconnected EP the year before, and then make it louder, better produced, more intricately designed and detailed, and you've got one of the best full-length Canadian thrash metal debuts in quite some time. Sure, there is still some semblance of standing in the shadow of those better-known countrymen performing in the same style, but this Ontario trio is wise to cultivate just a fraction of that Voivod influence and continue to shift it into something that becomes their own. The brighter, more powerful songwriting and mix of this album also highlights the contrast between the busy guitars and blunter, harsh vocals quite well, and both work better in unison than they did on the EP where it was a little rough.

It takes only the first moment of "Amorphous Forms (Shapeless Shadows)" to transport the listener off-world, with great melodic riffing, just the right level of effects, fluid bass lines and drumming that sounds a fuck ton better than the mix on the EP. Terrestrial Mutations is a phenomenal record because you simply don't know what's lying around each shift in its cosmic landscape; Jacob Montgomery's guitar playing is just that good, and he really brings to mind a lot of the more creative thrash axe-men of the later 80s and early 90s who populated records like Deathrow's Deception Ignored or Artillery's By Inheritance. Not so dauntingly brilliant as that stuff, perhaps, but constantly exciting, balancing out melody and aggression perfectly, and just alien and spacey enough to take me to that place on the cover art, and to many beyond. His vocals, while still a bit one-dimensional, have the right swell and mix of effects to feel like they are echoing angrily out through the empty hull of some drifting space-ship, and he's matched by a rhythm section of Michael Gabor and Sebastian Alcamo who are fantastic and both upped their game from the previous year's release.

This record just slays, from the Megadeth-meets-Voivod hooks of "Suspended Animation" to the more melancholic and mood-shifting title track, nothing ever sounds quite the same twice, thought it all seems to occupy the same envelope of style. They can pull off a ten minute composition with a lot more adventure in it as they can a shorter, more direct thrash piece, and when listening to this I feel like they could take on such an even wider scope, the stars are the limit!? In fact the one downside to listening through Terrestrial Mutations again is that I'm sad they haven't put out another offering in the 4-5 years since this one dropped. I know some of them are also involved in the retro metal/hard rock group Freeways (also a good band), but I can cross my fingers that they'll be called back out to the greater cosmos soon enough. Killer disc, familiar but fresh, and if you're looking for more stuff like Voivod's masterful 1987-1991 period or DBC's Universe then I'd advise you to give this one a go!