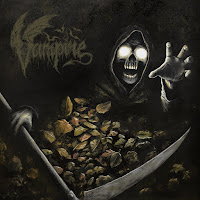 Vampire is one of those obvious-monikered sorts of bands that comes around every few years and then offers a refreshing 'reset' on the style that they perform, almost like they've gone back to the basics, stripped away a lot of the distractions and bad trajectories that other bands have gone down, and then throttle fucking ass. Like a Ghost. Or Midnight. In the case of these Swedes, they exist on a crossroads of the black/thrash niche that has become so popular again in these last 10-15 years, and the more traditional Swede black metal penchants for great melodies. Even  beyond that, they offer a bit more of a horror-influenced mindset through their wicked note choices and occasional atmospheric relishes, and the lyrics, all of which live up quite well to their name and artwork.

All three of their full-lengths to date, as well as their Cimmerian Shade EP, have been wonderful, but it's the eponymous debut which remains my favorite due to the songwriting, and just the realization that dawned on me when listening through this that something great was happening. In fact, I recall writing about this one already for my friend's Codex Obscurum dead-tree zine under my human name, but it bears revisiting because it's a really awesome rush of these concepts. Whip-nasty riffing force glazed in eerily melodic little guitars and dissonant hooks dominates much of the material like "Howl from the Coffin", and here they do fall under some familiar patterns, but it's all the little details that matter, like the wildly different breakdowns in that particular song, which came at me totally unexpected. The raucous vocals here are absolutely wild, on the surface an uncaring rasp, but the mix of it with the reverb and sustained lines are absolutely perfect. These guys manage to pay tribute to all of the acts that formed their sound, from Hellhammer to Venom to the German thrash titans, but they splash on an added coat of vile, blackened paint.

All the songs are great, but my personal favorite in their entire canon is "The Fen", which begins will chilly acoustics and atmosphere that makes you feel like you're out on a moor under the moonlight, and then just erupts into some incredible 80s Slayer or Possessed-worthy riffing, and then this drudging little break which feels like you're repeatedly getting struck by some bog mummy with a hammer. This is just awesome horror metal all around because it actually sounds threatening, rather than just merely talking the talk. The song titles are also just incredible..."Ungodly Warlock"? "Cellar Grave Vampire"? "Jaws of the Unknown"? "At Midnight I'll Posses Your Corpse"? Everything fits to the music so thematically. Interestingly enough, while this is an excellent album (and so are its successors), I still feel like there's a good room for growth...not every lick is as catchy or evil as it could be, and I can only imagine how impressive it will be if they rise to that challenge. Fantastic debut that I enjoyed to begin with, but has definitely grown on me since I reviewed it that last time. If you're into any of the awesome current wave of death/thrash or black/thrash coming out of both sides of the pond, or even if you find yourself stuck in the 90s Swedish black metal, you want this. You do!