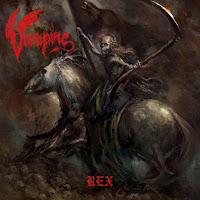 Vampire has been one of the more consistent Swedish extreme metal acts of the last decade, and they've got a pretty broad sound which can be seen as a successor to not only classic melodic black metal from that scene (Dissection) but also to the blackened/thrash legacy of a group like Nifelheim. And I wouldn't even limit them within those very parameters, because they've sort of developed a style of their own that is equally nestled between the black, death/thrash and black/thrash niches and provides them a lot of potential riffing attacks form many attention. Having said that, their third full-length Rex definitely leans mostly into the blackened thrash aesthetics, a hard hitting rhythmic undercurrent that is balanced off by a lot of excellent melodic guitars over the top. This one didn't give me the immediate thrills of their eponymous debut, but after a half dozen spins it's proven to be yet another excellent offering in their catalogue.

This is riff-fucking-tastic from the starts, with loads of faster paced guitars that structurally resemble a lot of what you hear from many of the frilly, evil, post-Venom sorts of groups. Take something like a Craven Idol or Deathhammer, but then focus in on the more extreme ends of those, barbaric riffing meant to roll over you like a...reaper on horseback!? But then take all that business, and add the complex and furious layers of memorable melodies that defined so much of Swedish metal of the 90s...be it the black metal end of the spectrum, melodic death, you name it. Beyond that, they also have a penchant for throwing in some tasteful and minimalistic synths right where it counts to elevate the black heart of the music to the next level. Rex is a beast from fore to aft, shifting between volatile, fast scathing numbers like the title track, or some more moderately-paced neck jerkers like "Pandemoni" which they spice up with rapid fills and dissonant little effects to add a layer of cinematic intensity. The musicianship is top notch, although I think it's really gotta be the guitars and light touches of synths that put this one over the threshold.

Vocals are a great, loud hybrid between a bark and rasp, almost similar to a Tribulation only matched up with the far more furious, thrashing music. They work especially well when they're barked out and sustained over the more shifting, ominous patterns as in "Moloch", but it's a top notch performance on every line across the record, spitting all kinds of horror/occult themed lyrics that you want from a band with the Vampire moniker. The production here is just right, kind of timeless and washed out rather than too punchy or bright or polished, and it just foments the perfect atmosphere for this level of grace-threaded violence. If you're a fan of bands like Nifelheim, Bewitched, or Swordmaster who were blowing up a bit in the 90s Swedish underground, this band is the most natural successor to much that they strove for, and in my opinion even more effective. Rex is their most purely punishing record to date, even if it's not quite my favorite, but it's the sort of aggressive/atmospheric mix that will sound just as good today as it's going to in a decade. Don't sleep on this.