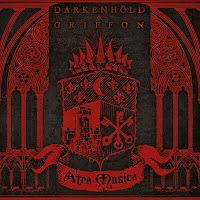 Always a pleasure to hear something new from Darkenhöld, one of the more consistent and consistently unsung acts on the French black metal scene, and in Griffon they have been paired up with another band that share their fancy for integrating the Medieval and antiquated aesthetics into their music without ever losing the style's core, traditional identity. Each of the bands offers four tracks here on Atra Musica, with the Griffon material clocking in longer due to some heftier cuts. I'd have to say that stylistically the pair are a good match on the release in some ways, or at least they WOULD be if Darkenhöld were performing something more akin to what is on their full-length albums...but here they have taken on a curious, almost more experimental folk edge to their material.

Essentially they're using a lot of cleaner guitars to represent what would normally be their heavier electric riffs, but keeping the vocals just as harsh as ever. It evokes a strange contrast, but one that becomes quite fascinating as you progress through their contributions. It's almost as if they had decided to put out a pure folk/acoustic EP and decided it would be better to include it as part of this split, but I'm not at all let down by the material, as it's super atmospheric and the vocals really drift over the busy clean strings in a menacing, obscure way. A Medieval Peste Noire? If they went in this direction for a longer record I would certainly be on board for checking it out, because all of their other traits are still present and there's enough variation and fertility of ideas due to the acoustic choice while it doesn't actually lack for sounding as majestic as they have when they're more 'plugged in'. On the other hand, Griffon is fully plugged in, and I think there's a contrast between the two bands' productions which might have served the split release better had it been smoothed over a little...

So the first half of this release is much louder, brighter, harsher in nature, with walls of force blasted sequences graced over by Romantic, winding tremolo picked guitars and all manner of voices that range from a nasty black metal rasp to cleaner, more narrative chants that sound quite cool in French. The riffing is quite busy, not always catchy but changing up the moods enough that it feels rich in its textures, and the rhythm section also sounds quite good, with dreamy bass lines and effortless blasts or double-kick breakdowns with a lot of splash to support the well-woven melodies. I do think the lead rasp is a little bit overbearing at times and sounds a smidgeon too nihilistic for the music itself, but overall there's just enough going on that I kept paying attention, and I dug the 'Interlude' which is all orchestra/organ and makes an interesting transition into Darkenhöld's less aggressive but equally elaborate material. Apart from the differences in volume and approach, which don't make for the most flush or consistently appealing split recording, the music here is all quite good. I wouldn't go at this for your first Darkenhöld exposure, any of their first three full-lengths would be the better choice, but they take a risk here which ultimately pays off.