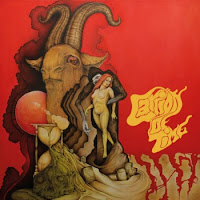 I was really curious about this record at first because somehow I had registered that the trippy cover aesthetics and 'death metal' branding might result in some quirky, psychedelic spin on the genre, and after listening through Carrion of Time a few spins I realized that was not exactly the case. Sure, you could make the argument that the Finns' debut was a death metal that leaned more on atmosphere than musicianship, and that's what it is, a hazy and truly old school death metal record, threaded with death/doom influences and reaches so far back into the genre that I'd almost label it a proto-death album due to the primordial production and simplicity of the riffing patterns. There might be a small fraction of influence from their fellow Finnish exports of the early 90s, but this comes off as even more ancient in its own way.

I'd probably liken it to a descendant of Hellhammer, with some additional influence from the first few Tiamat records when the Swedes were almost wholly death metal. The former is felt primarily through the vocals, which are like a more fleshy, dynamic Tom G. Warrior bark which weaves in a bit more of a grotesque guttural circa Killjoy or Chris Reifert. The guitar tone isn't quite as raw edged, but clearly they were going for a tone that felt like it would if it were spurting out of a cab in the same room as you. A lot of the riffs slog along at a workmanlike pace, with somewhat predictable chord patterns, but the magic is when they erupt into these truly evil sounding, slower tremolo picked riffs which will recall bands like Death and Obituary, along with some more spacious, open string or higher pitched riffing which creates an incense-whiff of archaic atmosphere that helps round out the experience. The bass doesn't do a whole lot of interest except hover like a smog behind the rhythm guitars, and when the leads or melodies burst forth they really deliver a needed dynamic charge to the experience.

Drums are quite appropriate, with lots of splashing and crashing, fills aplenty to once again help emphasize the riffs since they are so basic in structure for the style. And it's that minimalist style which both hinders and helps the album. I mean it can certainly evoke the vibe of a very basic demo level death metal act from the late 80s/early 90s, paraphrasing the riffs of others and not in the most intense or interesting of configurations, but at the same time when the guitars come across a truly eerie riff it stands out quite a lot and makes you appreciate the whole package. I also like some of the more subtle, creepy melodies which arrive in tunes like "White Flowers Abloom", there probably aren't enough of them scattered through the album, but they make it clear that Ghastly is quite focused on its composition, the patience to let these details elevate the material beyond the mere redundancy it would otherwise suffer. It's a solid, and somewhat intriguing debut for fans of seminal death and or death/doom, and a seat from which the superior ideas and craftsmanship of their second album were sprung.