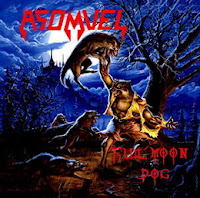 If England's Asomvel bears more than a passing resemblance to the late, great Motörhead, one can hardly blame them, as Lemmy and company had such a simple, badass, fun style and disposition that who in their right mind wouldn't want to? It's not like they just kicked this off in the 21st century, in fact the group formed back in the earlier 90s, but didn't even start releasing much until over a decade later. Despite being put out in 2007, the Full Moon Dog EP is actually one of their earlier recordings, and one to feature their late, original bassist/vocalist Jay-Jay Winter, the 'Lemmy' for this particular production. From my experience, there actually aren't a ton of groups who play it this close to the London lords of filthy 'eavy metal, and that provides both Asomvel's strengths and their limitations.

For all intensive purposes, this is a well-produced effort with clear, rocking guitars anchored by the tangible and fat-toned bass lines. The drums sound great, and the vocals are also pretty even in the mix. Winter had a gritty style not unlike Lemmy, but with a little bite and bark of his own that comes off with a bit more of an accent than his influence. Unfortunately it often sounds a bit looser in the verses, almost drunken-natured, and lends a lot to how they have an overall sound like a bar band, which is sort of the point, but not terribly memorable. They do really simplistic verse/choruses with some leads splashed in there and attitude all around, with a bit less of a speed, punk or even thrash metal influence that Motörhead often toyed around with in their 21st century recordings; this leans more on bluesy hard rock side of those efforts, which in my opinion can often turn into insipid songs that are impossible to pick out from too massive a crowd of bottoms-up blues rock.

If there were a little more grit, a little more danger, or vitriol...it would work a little better than it does, but musically Full Moon Dog is a bit generic and doesn't take any risks. I'm not saying that Motörhead broke away from its own formula all that often...there was some variation and evolution, but it was gradual over the decades. But the thing is...it was THEIR formula. I'm all for bands taking on that influence, but I'd like to hear some interesting spins on it, like how Tank veered more into pure heavy metal territory, or how the younger Swedish band Bombus worked it into their own massive sounding style which I really enjoy. This Asomvel disc is just par for the course, and it doesn't do anything particularly well that I'd listen to it over even my least favorite's in Lemmy's backlogs. Werewolves are cool and all, but the leather was a little stretched here, the spikes dulled. I'd much rather recommend checking out their 2013 album Knuckle Duster or their brand new World Shaker, which kick a lot more ass in the same exact niche.