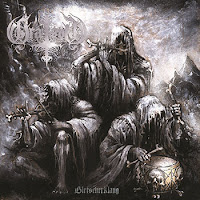 Gratzug is another underrated German black metal act which has been quite productive in its near decade of existence, with about five full length albums released and a good number of splits, EPs, and such under its belt. But even despite the positive response I've had for some of the prior efforts, I was not quite prepared for the euphoric, majestic escape offered me by the four tunes on this Gletscherklang EP. Limited to about 300 copies, it's understandable why this really hasn't been a 'thing', but considering the popularity of heavily atmospheric black metal these days I think it's a gem well worth tracking down in whatever format you can find, or at least talking about so that it's availability might one day flourish.

Just around 25 minutes, each of the tracks here complements one another and provides a fulfilling experience without the need to bog itself down in the swollen repetition that other, comparable acts might attempt with 9-11 minutes and less riffs. Gratzug generally plays blasted black metal entwined with a number of slow to mid-ranged breaks where the double bass is hammered on and these are often the most glorious moments throughout the material. The guitars are just raw and acidic enough to appeal to deep underground pundits, as are the suffocating rasps of frontman/multi-instrumentalist Mephistopheles. But this is all drowned out in just the perfect level of atmosphere which creates an important balance of both distance and immediacy, and a lot of the credit is given to the whooshing and windy symphonic elements placed to support the surging of the guitars. Tastefully implemented, they create a warmer, I daresay more positive feel than a lot of the more frightening bands to attempt this like the legendary Emperor on their classic In the Nightside Eclipse; but the result is no less impactful upon the spirit of the listener, and honestly I could listen to this exact same style for far longer than the 25 minutes this EP asks of me...

Combine this approach with some tremolo picked guitar lines that create an appropriately hypnotic melancholy, as well as small segues like the firelit ambiance awaiting in the depths of "Wandelt Wieder" and you've got an amazing outdoorsy black metal release which is about just that...the 'release' that is so vital to me when listening to this style. From the trappings of man, the follies of civilization. I went into this on a whim, not expecting much apart from the rather attractive cover art and got so much more out of it, a good half dozen listens already, with many more on the horizon.