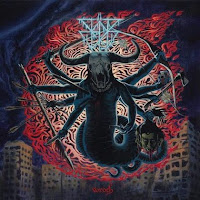 Wroth is a record that really strikes a balance between its crusted and doomed aesthetics, imbuing them even further with some elements of death metal, Southern blues-injected grooves, and an occasional direct window into those angry hardcore fundamentals from which its sludge and crust components are derived. Oakland's Bädr Vogu bind this mass of styles into a unified whole in which each of them seem to complement the others, and then drown the entire experience in loads of existential and depressing samples from sources like True Detective character Rustin Cohle. The whole package is rather brutal and consistent in its disposition, comprised of lengthier tracks ranger about 7-11 minutes that pretty evenly distribute the influences I mentioned above.

And for the most part, I was on board here, because the sound of the whole thing is quite good, the rhythm guitars effectively cycling between doomed grooves and crushing chord barrages, given a little more depth by the occasional use of dour melodies, brief tremolo-picked departures and other 'musical' contributions that help recede the record from the shore-lines of boredom that a lot of its contemporaries often get their toes a little too wet in. Certainly there's a core here of the old NOLA Eyehategod sound, as well as Boston's Grief, albeit less nasty and hopeless, just replete with the crashing, loping, striding guitar riffs that themselves are often fixed with percussive changes that you don't quite expect. This helps the album retain some degree of freshness since it never strangles itself with ceaseless, dull repetition, even though a lot of the rhythm guitar riffs throughout the album are hardly memorable, and will draw your mind back to the many times you've heard similar within the sub-genres that it draws from. Vocals vary between the snarl typical of the style to a broader guttural, and both work although neither of them are bringing anything new to the buffet either.

My favorite piece on the album was surprisingly the shorter closer "Of Misanthropy and Malaise", with beautiful downtrodden acoustic guitars that repeat beneath a shroud of samples, spoken word and eerie violins to create an amazing, slowly cresting atmosphere as the fat bass lines erupt to drive it ever forward. It's a little bit of a left turn from the rest of the material, but offers such a bluesy and swampy vibe that it's irresistible and almost makes me wish they had included more segues of a similar nature, more immersion than their heavier tunes gifted me. However, I won't get too down on the rest of the record, because I think it will certainly hold an appeal to fans of sludge, Southern-fried doom and slower, driving crust or even slower death/doom. Loved the logo and the cover art to this one, which I think the guitarist designed, and the anarchic lyrics which attack everything from the average daily grind to substance abuse to the American Dream seem to mesh well with the selected samples and pounding certainty of the riffage.